Autodash from left to right, swipe to jump, and tap to attack.

By now, we're familiar enough with endless-runners that we can all but write tutorials on new games before we play them.

Ronin, however, is proof that not all endless-runners on the App Store follow the same formula.

While the main character still dashes dauntlessly from left to right, there's a lot about Ronin that helps to distinguish it from the pack.

As the running ronin in Ronin, you have a couple of basic moves at your disposal. Swiping upwards will cause you to jump and swiping downwards will execute a slide maneouvre.

These two moves are used principally for enemy avoidance, but both can be augmented with a katana slash (swipe left to right) which dispatches of your enemies in one silky smooth slice.

To keep you from slashing your way through every stage, Ronin provides you with plenty of situations where you'll be tempted - if not required - to use the defensive maneouvres to duck under incoming arrows or leap up to drive your katana through an ogre's skull.

It's all good fun trying to figure out what you should do next, and thankfully Ronin is flexible enough to accommodate players who'd rather duck than disembowel.

Stop and stab the roses

While it never quite captures the atmosphere of games like Okami, it does present a beautiful and interesting world to run through.

Of course, pretty backgrounds and catchy music do not a game make, and Ronin knows this. In each run, you'll be assigned a string of missions to complete, like rescuing trapped peasants or destroying the emperor's propaganda posters.

While these rarely add more than a target for you to swing your sword at, their inclusion brings a nice bit of flavour to the game and makes it feel a bit like Samurai Champloo.

As you progress further in a run, you'll eventually collect enough wisps to transform into your invincible spirit animal. As with Totem Runner, this power-up takes a good bit of patience and maneouvring to charge up, however, and it's a bit underwhelming when you finally let it off the leash.

During its beautiful and fun run, Ronin's only real weakness is its overall lack of polish.

The controls are a bit soft at times and seem to register quick swipes less readily than more deliberate ones. Add to this a handful of typos in the game's text and Ronin begins to feel like a bit of a rush job.

A beautiful and intriguing rush job, mind. After an update or two, there'll be no holding Ronin back. 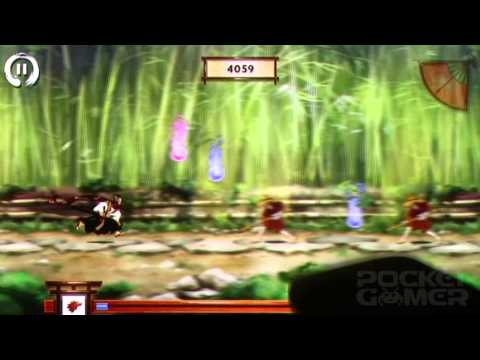 Captivating art and fun gameplay come together in this runner. With a few tweaks to the controls, this will be an extremely solid title
Next Up :
Alien: Isolation review - "Chestbursting fun in the palm of your hand"