A quick look from GDC

Rollercoaster Tycoon is a staple of many people's childhoods, being one of the first family-friendly ways to extort money out of people and kill them in horrific accidents before they were old enough for GTA.

The series has gone a little quiet lately, but it bounced back onto the scene with Rollercoaster Tycoon Touch, a free-to-play mobile edition which generated a fair few downloads for Atari and got people talking about the series again.

Not one to back down on a good thing, Atari is now bringing the mobile edition to Switch, revamped and redesigned to be a premium experience, and our early look at it from GDC is definitely promising.

There's three different modes to choose from, with Campaign and Scenarios if you fancy some objectives, or the classic Sandbox mode if you just want to mess around. 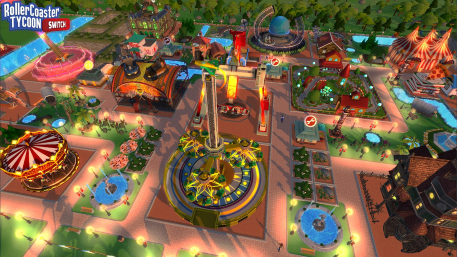 We were shown the latter option, which allows you to fly around your park, dropping rides and connecting paths willy-nilly, and it all looked pretty straightforward to do.

Atari's focus is on ease-of-access, so anyone who wants to jump in and start constructing their park can do so with ease and ignore a lot of the deeper menus that dig into the cold, hard stats beneath everything.

There's around 200 different items to place in your parks, and that includes the titular rollercoasters. You can drop in one of seven different types if you don't want to spend time building your own, or you can craft the ultimate coaster to your heart's content if that's what you feel like doing.

It's all bright and colourful too, with a number of assets reused from Rollercoaster Tycoon Touch, though the team was keen to stress that this is a whole new game and not merely a port of the mobile version. 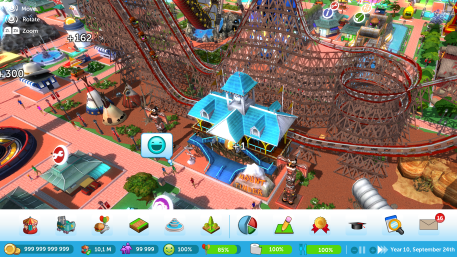 But underneath its charming exterior lies plenty of opportunity to mess about with the business. If you really want to, you can set the prices for different stores, and fine-tune experiences to make them more enjoyable for visitors.

There's also heatmaps, which will show you which areas of the park are proving most popular, and help you plan out new attractions and stores to maximise your revenues, if you want to get super technical.

Or, if you just want to be a bit of a bastard, there's still plenty of scope for that. Atari happily showed off its own "evil" park, complete with twisting hedge mazes designed to annoy their customers – though it's unclear if you can create incomplete rollercoasters and send guests plummeting to their doom.

Whatever the case, it won't be long until we find out. Rollercoaster Tycoon Switch is set to launch on Nintendo's console in September 2018, and we'll be sure to get our mitts on it when it lands.

How to redeem Roblox toy codes?