Hold all the cards

Over on Reddit, there's a little bit of buzz for a game called Rogue Adventure. It's a roguelike deckbuilder game that takes a lot of its inspiration from Slay the Spire. It's available now on Android, with no plans to release an iOS version yet.

There are quite a few Slay the Spire influenced games on the market at the moment and quite a few of them are good. There is Dungeon Tales, Royal Booty Quest and Night of the Full Moon to name a few. But, I don't think there's so many that I'm fatigued by the genre yet, so one more can't hurt.

Much like the game it draws influence from, Rogue Adventure will see you making your way through various dungeons, taking on enemies, bosses and gathering treasure. All the while you'll be building up your deck with each victory trying to add cards to your set that create good synergies. 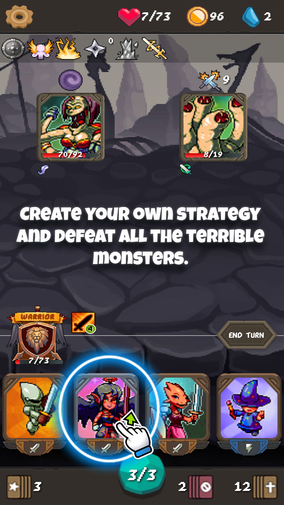 As you play more you'll also unlock different classes, all of whom have their own abilities which can affect your strategies. There's also currently over 100 cards in the game so combined with different class types in theory that's a lot of different tactics to test out.

In the Reddit thread, the developer welcomed any feedback and has so far been very responsive to anyone who's had a suggestion. So if you try the game out and feel there's a way it could be improved then it appears your thoughts are welcomed.

Rogue Adventure is available to play now for free on Google Play. There are currently no IAPs so the game is entirely funded by the ads that will pop-up. The developer plans to add a one-off in-app purchase to simply remove the ads at some stage in the future.

Check out our news section to discover the latest, and greatest, games.
Next Up :
Valiant Force 2, the sequel to the hit 2016 strategy RPG gacha, opens up pre-registration for Play Store users