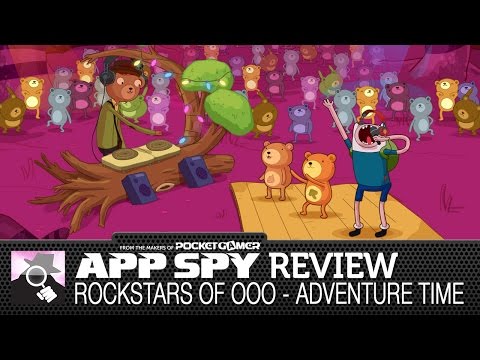 Subscribe to Pocket Gamer on
There's something innately charming about Adventure Time. It's a cartoon with such aplomb, such joy, that it's difficult not to get swept away in its giddy swinging arms and magical constructions.

Sometimes that hasn't quite transferred to video games adaptations though. There have been hits for sure, but there have been a few misses as well. Rockstars of Ooo firmly fits into the hits category though. As is fitting for a rhythm action game.

It's not super complex, but it's full to the brim with Adventure Time's irreverent humour and charm, and it offers enough challenge that it's hard not to get engrossed.

The game is split into a series of different sections, each with its own take on the genre, but each played in the same way. They're all sort of Simon Says riffs that see you tapping on the screen in response to a cue.

Sometimes you're copying singing bears, other times you're reacting to the prompts of a witch to make zombies clap. Another chunk sees you slicing up enemies from the bag of a flying stretchy unicorn.

Each section is split into five different levels, which get harder and harder as you progress. There's a tutorial at the start of each chunk that explains what you have to do, then you're left on your own.

There's a joyous bounce to each of the mini-games that makes them infectious. Squawking bears, shredding witches, and ball-based wizarding duels keep things fresh, while using the same basic core so as not to confuse you.

My personal favourite is the bizarre scat-be-bop gameboy who's having a conversation with a squonking mouse. What's not to love about that?

You'll definitely need your headphones on to get the most out of this one, and getting the best scores on some of the tougher levels is going to take you a while. Once you've done that though there's not a lot of reason to play again.

I encountered some crashing problems on my iPad Air as well, so that's something to watch out for. Still, this is a fun, engaging rhythm action game that pops with all the glee of its inspiration.

A game that's a blast while it lasts, fans of the genre or the show will lap it up
Next Up :
Hero Emblems II review - "Lovely visuals and music, but match-3 combat lacks strategic depth"

Out at midnight: Rockstars of Ooo - Adventure Time Rhythm Game