Do you remember BattleBots? It was a show where two robots enter an arena, filled with saws and hammers, to fight each other to “death”. Each robot had a different design and weapons that they would use to destroy the opponent.

That’s kind of what this game is, only not as cool. Robotics! is one of the most recent games from Zeptolab. If that name rings a bell, it’s because Zeptolab is the company behind one of the best mobile games: Cut the Rope.

In Robotics!, you’ll control your own robot. You’ll start by learning how to walk and move your legs and arms. You make them move a certain way, and your robot will try to make the same move over and over until it reaches the goal.

In my opinion, this idea alone would’ve made a great game. Finding different ways to overcome obstacles and enemies has the potential to create different physics-based puzzles, just like in Cut the Rope.

Sadly, Zeptolab took a different path, because as soon as you learn how to walk, you forget about it and start fighting. After you finish the tutorial, you’ll be thrown into a ring with another robot, you’ll have to use the same mechanics to move and hit the other robot. The one that wins 2 out of 3 matches wins the fight. While the loser explodes.

It's a real-time smackdown

You’ll fight against real players from around the world. There’s a bunch of arenas you can try, but the harder, more expensive ones are meant for higher-level players.

To fight in any arena, you’ll have to spend tickets. These tickets are pretty easy to come by: you can wait for them to recharge, or you can watch an ad to speed up the process.

Either way, this limits how many times you can play, making it a bit frustrating to fully enjoy the game. You’ll have to choose between playing a lot, and getting smaller rewards, or go for the big arenas and spend more tickets.

Each time you win you’ll get trophies that’ll help you rank higher on the leaderboard. You’ll also get boxes that have experience, new parts, gold, and weapons.

You’ll need all the loot you can get to upgrade your robot’s parts. You’ll level up your parts to deal more damage or have more HP. You’ll also gain experience to level up your profile. This doesn’t affect the game directly, but it does unlock unique rewards, like weapons, or gems.

You do get to customize and create your own robot, with the weapons, legs, and arms you have available. This is the coolest feature of the game since you can try different combinations to make a better robot. Keep in mind, though, not every combination will work on a real fight. Fortunately, you can test your creations before you go to a real battle.

The actual battles are not as good as you might hope. You’ll only tell your robot how to move before a fight. After that, it’s all about the RNG. Since your robot is moving the same way repeatedly, you can lose a fight just by not moving correctly.

I’m sure any competitive Robotics! player out there knows how to make the best moves. But for most of us, it’s just plain annoying to have to lose a battle for no reason. There were times where my opponent just stood there and didn’t make any move, and they still won.

Overall, Robotics! doesn’t feel like a Zeptolab’s game. The universe and characters feel too generic, which is surprising coming from a company that creates unique characters and worlds in most of their games. 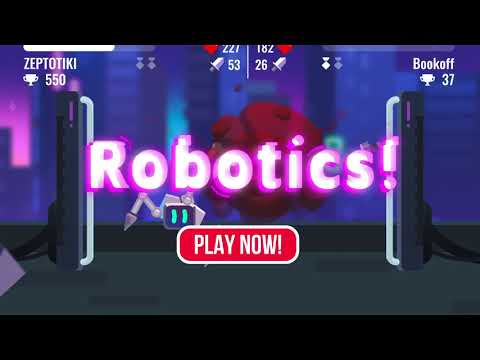 Zeptolab is a seasoned company. They know how to create attractive games with addictive gameplay. But in this case, Robotics! can’t live up to other titles from the company. The battles are mildly interesting, but depending on randomness and having limited playtime gives you no reason to open the game.

Even their other recent game, CATS: Crash Arena Turbo Stars, which has the same mechanics as Robotics!, has a more unique style and it’s more fun to play altogether. Sadly, Zeptolab has set the bar so high, Robotics! just fell flat.

You can download the Robotics! from Google Play Store or App Store.

Zeptolab, a company known for the addictive and fun game Cut the Rope, has released a new game about battling robots: Robotics! Can this game be as good as their other games, or is it just going to malfunction?
Next Up :
Turtle Beach Atom review - “A stylish-looking controller that's let down by being adventurous”

Robotics! is an upcoming, casual robot building and battling game from ZeptoLab that's heading for iOS and Android in August