Revived Witch launches is celebrating White Day with a new Love in Return event that adds a new doll, feature, rewards, and more

Yostar has just revealed a new event coming to its popular pixel art mobile RPG Revived Witch. Called Live in Return, this event celebrates the romantic White Day, where people give back gifts to those who gave them gifts on Valentine’s Day. Players can expect to find lots of gifts in the form of a new doll, activities, rewards, and more waiting for them in the in-game celebration.

Love in Return will run from March 8th to 22nd, with the Love in Return/Memory Shard festive puzzle being at the centre of it all. By finishing numerous daily puzzle missions, players will earn Memory Shards that in turn unlock new puzzle pieces. Another mini-event, called White Day Letter will take place between March 9th and 15th and will see everyone receive love letters and gifts from dolls who wish to express their true feelings and gratitude. 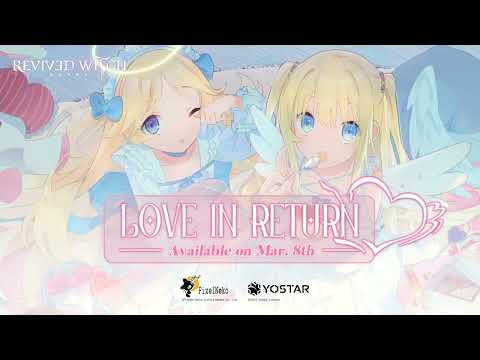 Moving on, UR Parfait is the new doll being introduced with the event. She is one of the twin gatekeepers of the Sanctuary and is completely opposite to her elder sister Afallen. Parfait is a Destroyer unit with her Punishment skill dealing heavy physical damage and causing the Honey Trap debuff to an enemy, and her second skill gives her a Full statis and boosts Punishment. Additionally, Afallen also receives a new Sweet Memoires costume, alongside new festive packs. Nannar will also appear in the awakening summon between March 15th to 22nd.

To top it all off, a new feature called Soul Rebuild is also being added to Revived Witch. This will allow everyone to reset the level, ascend level, and skill level of a doll with Ascension Level greater than one, by using Purifying Water. Upgrade materials will then be refunded which can be used to enhance other dolls. Yostar has also given out 100 free Purifying Water to all players to try out the new feature.

Celebrate the reciprocating love by downloading Revived Witch for free on the App Store and Google Play.

Also, check out this month’s redeem codes for Revived Witch to get free goodies!
Next Up :
MIR4 launches a new world boss while their new play-to-earn MIRAGE system gains popularity