The Reigns mobile game series has been proven quite popular over the years and today its acclaimed developer Nerial and publisher Devolver Digital have officially launched the title on Netflix Games. Reigns: Three Kingdoms brings back swipe-based decision-making and kingdom management as players are thrown into the final years of the Han dynasty, inspired by the classic historical epic The Romance of the Three Kingdoms.

The series has been around since 2016 and has been extremely successful. With four games already under its belt, the franchise has garnered numerous awards, earning millions in the process. The fifth game, Reigns: Three Kingdoms places players in a position of power once again, as they swipe left or right to make decisions. Its predecessor launched on Apple Arcade so it's interesting to see this one go to Netflix’s gaming service. 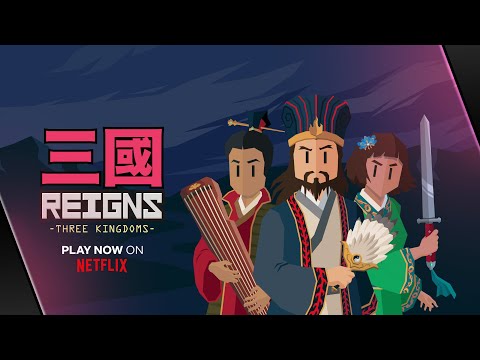 In Reigns: Three Kingdoms, players start off as a simple beggar whose goal is to climb the social ladder all the way to the top, becoming a ruler of one of the 14 regions of China right at the moment the central power of the Emperor is gone. It is a race against time and players will have to unify the warring factions and even endure metaphysical twists and turns as their actions will have long-lasting contributions to history.

The gameplay has also been enhanced with a brand-new battle system to complement the core system. During the five-hour experience, players will immersive themselves in this epic story filled with varying factions, wars, and over 100 characters as they negotiate with rivals, forge alliances and recruit soldiers for battle. Expect to wed people and raise children too.

If you are ready to be part of the dying Han dynasty’s history, then subscribe to Netflix for full access to Reigns: Three Kingdoms and all other games in its expanding catalogue.

Also, check out this list of the best narrative-driven games to play on mobile!
Next Up :
Infinite Lagrange ups its strategic element with new flagship gameplay