Radiant One came out a few weeks ago and caught everyone's attention with its curious story, slick art style, and atmospheric music.

You play as regular ol' Daniel, he goes about his regular life doing regular things, but when he sleeps his dreams aren't so regular. What starts out to be spectacular fantasies eventually become horrific nightmares.

Emily gave the game a silver award in her review for its interesting story, excellent audio and visuals, despite its rather short length of about 40 minutes.

But what about you? What did you all think of the game? Without further ado, I hand you over to our App Army to give us their thoughts on Radiant One.

Okay, so this is one hell of a short experience. It certainly can't be accused of outstaying its welcome. The story was alright, but didn't really captivate me, especially having to click through plenty of dialogue text boxes (with a small font size that's hard to see on mobile).

The pace is slow and I found the interactions unresponsive at times, especially during critical quick time events where my fingers sometimes hid the onscreen prompts. I can't really recommend it, but credit to the developers for creating something different.

As a rule, I thoroughly enjoy story-driven interactive experiences on mobile, but Radiant One considerably effected my attitude towards the genre. There is quite a number of issues that I have with this game.

Firstly, the story itself didn't click with me that much. I felt it was rather depressing and uninteresting. Secondly, I failed to grasp the purpose of collecting various items and the "choose your own adventure" elements in the game.

However, the major disappointment was the necessity to hold/press/swipe all those buttons at the right moment, which required quick reflexes and multiple attempts on my part.

Also, the sequences when the playable character has to run away from that nightmarish creature is probably the worst reiteration of Temple Run on mobile since... the emergence of Temple Run itself.

To sum it all up, I hoped Radiant One would turn out to be a bright one, brilliant one, dazzling one, lustrous one or at least sparkling one. But in the end, I saw something dark, gloomy and dull. Even some sort of happy ending didn't do the game any good. 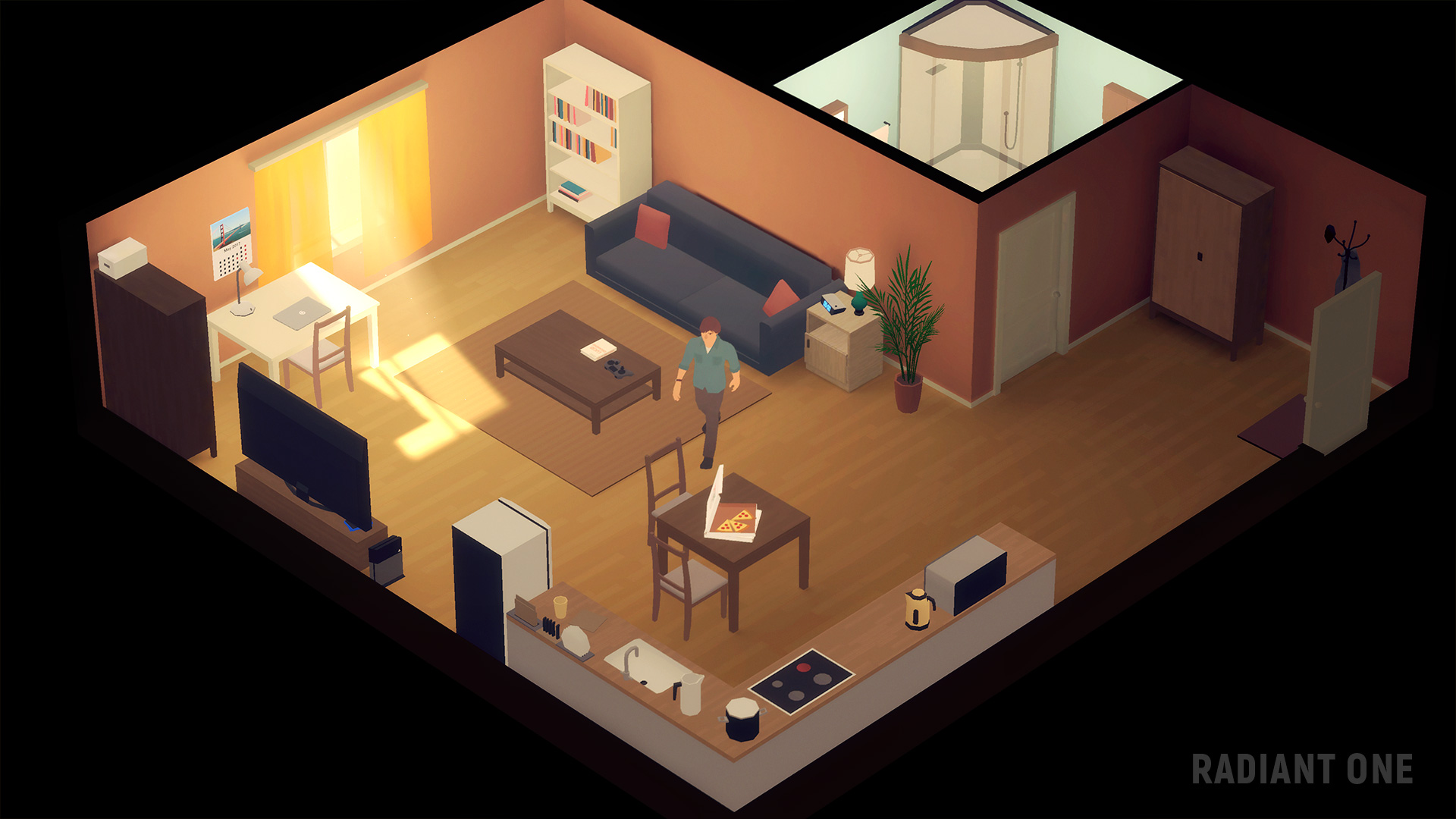 I was expecting a relaxing adventure puzzle type game, but what I got instead required you to be on your toes and use fast twitchy controls.
The game in the description and video of the App Store wasn't the game I ended up playing.

Overall, I really like this game. It has a nice art style and the gameplay is minimalistic, but it works here. Although, I did find it frustrating that sometimes there aren't enough visual cues when you need to do something quickly. I also wish that the main character's walking speed was a little bit faster.

Though it's incredibly short, that didn't really hinder my enjoyment. The story is interesting and I want to see more things like it.

I'm not sure I really understood the storyline to this game. It felt more like an experience rather than an actual game - something that you are meant to sit back, relax, and engage with rather than play. The graphics are simple, but work well with the style of the game, and the soundtrack creates an eerie feel and atmosphere.

It's not a game I would say engaged me greatly, but one I felt like I just needed to finish to see if there was a point to the storyline!

This is not my usual type of game, but I thought it could be interesting to play. Sadly the slow pace and unresponsive controls greatly detract from the experience. The spinning circle you have to tap at the correct time is particularly annoying.

I've fallen down a gap and died when I'm supposed to be jumping down a dozen times, it's just too annoying to continue playing. The section just before that also has an occasional bug where I die even though it seems like I should be progressing. Shame, it could have been much better if the controls worked and were less buggy.

The game is pretty well made. The music is atmospheric, the lighting effects are immersive, and the whole thing is just neat. But the game is really short, and the plot twist is not very surprising at the end.

The experience is not unpleasant, but on the whole, it remains superficial and there are many other point & click games that offer more captivating waking dreams.

The game runs pretty well on my device. It was fluid and smooth, though a little short, but I found it interesting and different from other kinds of "conventional" mobile games. Would I recommend it? Probably not.

Despite the cool graphics, the storyline is simple and it doesn't have a great plot twist (you know at the beginning how it is going to end). Something in particular that could use improving is the on-screen controls, things were a little bit overcrowded on my device. 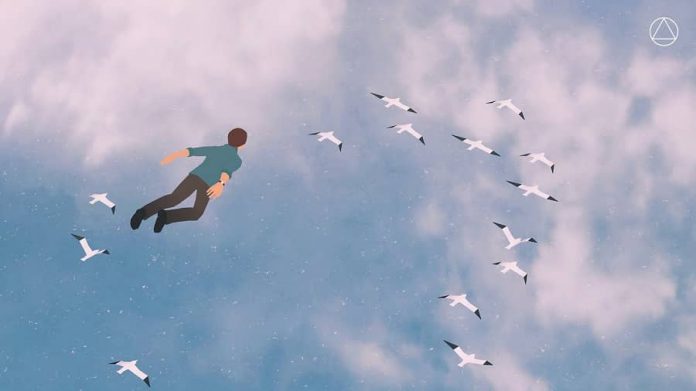 I hesitate to really call Radiant One a game. I'd say it is a kind of click-through narrative. It's simple and not really challenging. It leads you by the hand to a few different rooms to uncover a simple (often repeated) story and lesson.

The music is good, but nothing new, it suits the game well and adds to the atmosphere. The graphics are clean and have a nice minimalist style.

I don't think I'll be spoiling much to say that the bulk of the story takes place in dreams. The rooms and other places you'll visit during the dream sequences are for the most part non-existent until you actually walk in them and then they appear. Those are all the things I enjoyed about Radiant One.

My complaint really is that it is very short. I probably spent no more than thirty minutes from start to finish, and I'd question if there's enough here to justify the £2.99/$2.99 price tag.

Radiant enough to light up the Vanilla Sky? A cautionary parable on the dangers of escapism for you to escape into for 25 minutes.

More interactive narrative than adventure game. Radiant One tells a mildly entertaining story, but the whole experience suffers from poor implementation of gameplay.

The beauty of games is how our engagement with virtual worlds effects the narrative. Sadly, interactivity in Radiant One is relatively shallow, and the story enters into trope territory. Radiant One is a fun ride but by no means an essential addition to your mobile gaming library. 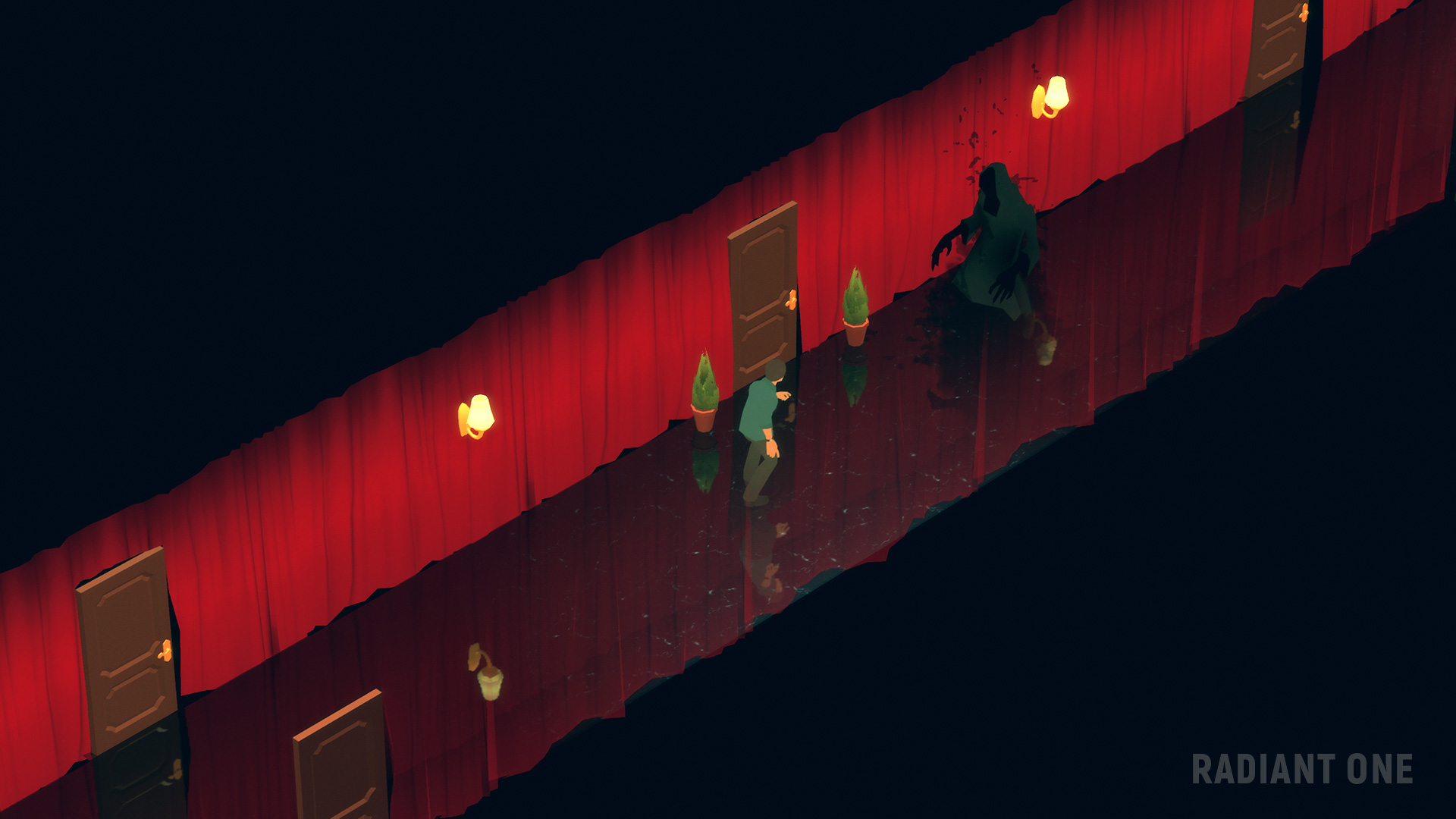 Radiant One is not so bright. I was disappointed with both the gameplay and the story here as neither did a good job of holding my interest.

The controls were frustrating and there are points in the game where you just want it to be over. Luckily, it's a short game, so there's that.

I thought this game was going to be a psychological mind bender but in the end it fell off the mark badly. There was too much narrative to read through, the controls weren't responsive enough for times when I needed to run quickly, and the ending was completely flat. The first few minutes had me interested, but then it steadily went downhill.

I have to say there were good qualities to the game. The graphics were very good and the atmospheric music was spot on, but this couldn't take away the disappointment of the plot and the short gameplay.

It was almost as if the developers tried to please lovers of several genres, but in doing so left nothing to please anybody. It's a shame because with a better plot and more gameplay I think this could have had great potential.

What is the App Army? The App Army is Pocket Gamer's very own community of mobile game experts. Each week, we provide them with a bunch of free codes and early access to the hottest upcoming games so they can provide their thoughts in features like this. To join, simply follow this link to the page on Facebook and request access. We'll get you in right away!
Next Up :
Top Ten Commanders in The Lord of the Rings: Rise to War