Gameloft and Universal Music Group have teamed up to release Queen: Rock Tour for iOS and Android. It's a rhythm-based music game that features over 20 classic songs from the influential rock band's catalogue.

This will include the likes of 'Bohemian Rhapsody', 'Keep Yourself Alive', 'We Will Rock You', 'I Want to Break Free' and 'We Are the Champions', among others. You'll be able to tackle the vocals, guitar, drums, bass and piano by tapping the tiles that will appear on the screen. 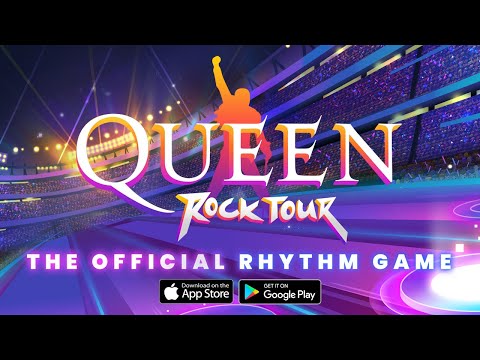 There will also be a series of iconic venues to rock out in as well across different countries such as London, Tokyo, Houston, Buenos Aires and Rio de Janeiro. Here you'll be able to create your own stage performances by choosing from a variety of outfits and accessories to wear. There are also music trivia facts and images of the band to unlock as you play through the game.

Discussing the game, Cedric Ratajczak, Creative Director at Gameloft for brands said: “Our ambition was to push the boundaries of music and gaming with a fun and rewarding experience that would put players in Queen shoes at pivotal points in their career and make them perform in real-time Queen's live music unlike ever before.

Ratajczak added: “The creative challenge was to modernize the traditional rhythm-game genre with innovative and mobile-friendly twists inheriting from hyper-casual gaming, and with a unique and happy visual style that offers a timeless look to the band, appealing to the new generation of players. “

Queen: Rock Tour is available now over on the App Store and Google Play. It's a free-to-play game with in-app purchases.

Interested in some upcoming games that are being tested in soft-launch at the moment? Here are some of the best we've discovered
Next Up :
Among Gods RPG Adventure lets you collect more than a hundred heroes to fight the good fight, now open for pre-registration on Google Play