Punch Kick Duck lets you fight through a tower using the three titular moves in a quirky action game, out now on iOS

Developer Shaun Coleman from Pipsqueak Games has officially launched Punch Kick Duck, a charming arcade action game about a duck trying to fight his way to freedom. Now available to download for free on the iOS App Store, the title sees you facing hordes of fearsome foes to climb a tower and take down the evil Baron Tigrisso.

In Punch Kick Duck, players can look forward to lovely 3D visuals with intuitive controls that offer rock-paper-scissors mechanics with the way the titular duck utilises his three moves against enemies. The game's title, of course, also refers to "duck" as the actual action of ducking, because Punch beats Kick, Kick beats Duck, and Duck beats Punch.

The game itself is nothing too demanding, and there are three difficulty levels that players can choose from to suit their appetites for a challenge. Perfectionists can also put their own skills to the test with the scoring system on each stage. To top it all off, the game can be enjoyed in landscape and portrait mode, with controller support and a cloud save functionality. 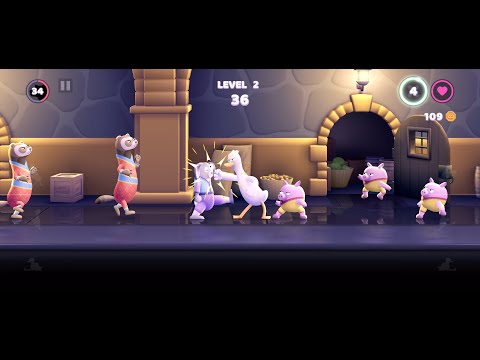 If you're curious about it and are keen on giving the game a go for yourself, you can download Punch Kick Duck on the iOS App Store. It's a free-to-play game with ads. It will soon be available on Google Play as well, but for now, you can pre-register to get first dibs as soon as it launches on Android. You can also join the community of followers on Twitter to stay updated on all the latest developments, or visit the official website for more info.

Are you on the hunt for more similar titles that will put your skills to the test on your mobile device? Why not take a gander at our list of the best fighting games on Android?

Next Up :
Halfbrick announces new lineup of games, updates, and a special Dan The Man 2 preview at Halfbrick Beyond 2023