EnerDC Games has announced the official release of Pumpkins knock down, a colourful casual game where you fire tomatoes to knock down pumpkins. With a similar concept to Angry Birds, the new mobile title is meant to appeal to all ages as it's easy to get into any time, anywhere.

Pumpkins knock down lets players destroy evil pumpkins by hurling tomatoes and bombs at them. Why tomatoes would want to destroy pumpkins is a little odd, but this quirkiness is perhaps what makes the game interesting. Players can also save trapped ultra-tomatoes, because why not?

The physics-based slingshot game features a wide variety of levels where you'll have to shatter glass tiles and manage hydraulic pistols to achieve your goal. You'll also have to navigate movable platforms, adding a great deal of dynamism to the casual gameplay. Levels get harder as you progress through each stage, with special Halloween-themed levels you can acquire further on. 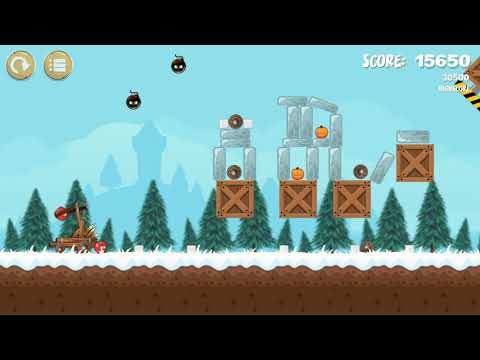 There's also an offline mode that lets you play the game even when you don't have an internet connection. With no ads and no in-app purchases, the game is safe for kids to play without a steep learning curve.

The light version of the game has six levels, while the Pro version has forty at the moment. If you're eager to try out Pumpkins knock down for yourself, you can give it a go over on the Google Play Store for Android devices. You can also join the community of followers over on the official Facebook page to stay updated on all the latest developments, or take a peek at the embedded trailer above to get a feel of the gameplay.

Are you on the hunt for more puzzling games on your phone? Check out our list of the top 25 best puzzle games for iPhone and iPad (iOS)!