We flip out with the creator of Powershot Pinball Constructor

While three games in six months doesn't quite make 2007 The Year of Pinball when it comes to DS gaming, the fact remains that the current or imminent availability of Metroid Prime Pinball, Flipper Critters and Powershot Pinball Constructor means that dual scren pinballing is more than a load of old balls.

Some of the debutantes are shiny newer than others, mind. Powershot Pinball Constructor is the only one of the three that enables you to design your own playing areas – an interesting approach we thought worthy of further investigating. So it's over to Victoria Trofimov from the Lithuanian studio Ivolgamus, to let us know all about the game's inspiration and implementation.

Pocket Gamer: Can you give some insight behind your decision to make Powershot Pinball Constructor, particularly the idea of basing it around a construction editor? Victoria Trofimov: There's a pleasing irony to doing a pinball game on DS. Pinball machines are big, unwieldy things that take up space in the corners of bars – if you can find them at all nowadays. On the other hand, the DS is so easily portable. We loved the idea of taking a game that's usually unapproachable, and letting you play it any time on a handheld console, and especially on the DS. Once we started developing the concept, the editor just seemed an obvious thing to do. Everyone loves the idea of fiddling around with a table editor, but it's something people haven't done for ages. How difficult was it to create a realistic physics modelling of pinball dynamics?

While any truly realistic physics modelling requires insane amounts of research and development, it's relatively easy to make something look realistic. Our goal wasn't a true pinball simulator, but rather something realistic enough that it would be fun to play, both for casual players and pinball fans. And I think we achieved it. The ball is affected by gravity, it bounces from objects correctly, and generally acts as you would expect it to act in a real pinball machine.

What aspect of the game has proved most difficult to get right?

One of our goals for Powershot Pinball Constructor was nice-looking graphics, and probably most difficult part of that was to fit art assets into the DS, which is very limited in resources. At first we tried to do it in 3D, but due hardware constraints, we couldn't get the quality up to our satisfaction. So we had to scratch everything, and redo it in 2D. Finally, in the end, we managed to get the graphics to the level we wanted to achieve, and the results look very good.

How has the DS' unique control input been implemented with regards to the game and the editor?

We've implemented flipper controls using the shoulder buttons, as most players would expect this. But for players looking for something new and exciting, we offer a Stylus mode, where you can control flippers with the touchscreen.

In the editor, we wanted to simplify things as much as possible, so anyone could build their table without much hassle. The editing is as easy as a few clicks with the stylus to place the objects on the table, drag them around where you want them to be, and rotate them using shoulder buttons. Click on the test button and you're ready to play your own table.

Is it possible to get an idea of the number of permutations available for constructing tables, as well as other game modes?

We have three unique tables that gamers can play alone or with their friends using multiplayer. All the tables have different themes, their own secret areas, and mini games. For the editor, we included six themes and base tables, so there's plenty to choose from. After you start placing objects like bumpers, drop targets, and so on, you can build a lot of different tables.

There are also six pre-created editor tables to play at, or get some ideas how to use the editor. And that's not to mention the variety of modes, ranging from single player Score, Time Attack and Stylus modes to multiple multiplayer modes for single, two or even four DSs.

What do you think is the game's best feature?

Our favourite, and I think the best part, is definitely the multiplayer mode. The ability to play against your friends provides a lot of fun. That's why we've included so many different multiplayer modes for single and multiple DSs. And on top of that, we've added special sabotage tricks too. So while collecting bonuses, you can sabotage your rival's screen making it go black, drain the leader's score, or make their flippers go mad. It's exciting and brings the competition to another level.

Our thanks to Victoria for her insights. The finished game is due to be released on June 29th. Before then, check out this quick teaser trailer of Powershot Pinball Constructor, which gives you some idea of the graphics and gameplay: 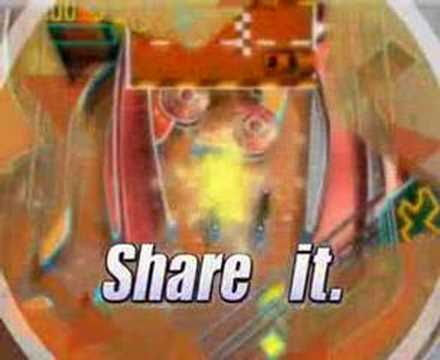 Build your own pinball table on DS with Powershot Pinball Constructor