Postknight 2 has officially launched a new update for fans of the casual adventure RPG, letting players enjoy additional languages, a new battle style, and a vibrant village to name a few. Titled "Greater Heights", the latest update also features improvements in the overall narrative, along with enhanced environments and enemy designs to boot.

In Postknight 2, players can expect to experience improved aesthetics and battle systems along with language options in German, Spanish, French, Russian and Brazilian Portuguese. The release of v1.3 adds the Treetops of Sagacia, and v1.4 will add The Fortress of Regalle on September 20th.

Kurechii's latest update not only welcomes a new village to explore but also interesting characters to meet and cute pets to befriend. The pets, in particular, include the Zenkoban and the Monyeet, the former being a Premium Pet that will help increase Gold Gain in combat and the latter enhancing Critical Damage. There will also be new collectables, challenging enemies, and fun Armoury Sets to tinker around with. 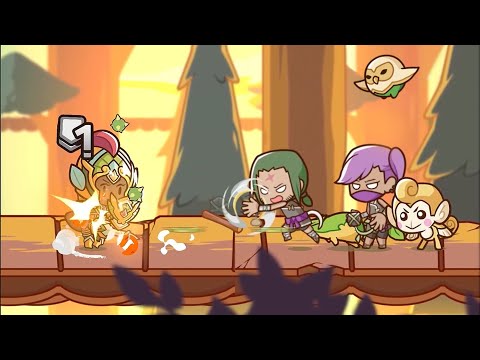 There are tons of other exciting new features in the latest update, which you can learn more about in the official website's update notice.

If you're keen on experiencing the jamp-packed new update for yourself, you can download Postknight 2 on the iOS App Store and on the Google Play Store for Android devices. It's a free-to-play game with in-app purchases. You can also join the community of followers on Twitter to stay updated on all the latest developments, or take a little sneak peek at the embedded clip above to get a feel of the game's updates as well.

Next Up :
PAKO Highway, the newest spin-off in the popular police pursuit simulation series, releases onto early access for Android

Pre-registrations for Postknight 2, a sequel to the popular adventure RPG from 2017, have begun on Android and iOS

Postknight 2, the sequel to the popular adventure game, is now available for Android in Early Access