It’s hard to overstate my satisfaction

Ages ago, I took it upon myself as Pocket Gamer news editor to randomly email any companies that had a game I thought would translate nicely to the iPhone, in the hope of chancing upon some in-development handheld gems.

One of them was Valve, as the idea of playing Portal on iPhone was simply too delicious and, from a gamer's point of view, seemed ideally suited to Apple’s device.

A reply wasn't immediately forthcoming, until just the other day when a port of Portal appeared in my inbox. Only this wasn't from Valve. It was from an anonymous (and clearly a very talented) developer who wasn't actually answering my random email, but showing off a tech demo of the award-winning puzzle game he'd managed to crowbar into the iPhone.

There's been quite a bit of speculation around the internet as to whether or not this was a fake video. While it may be unofficial, it's as real as this piece of cake.

Portal is essentially a simple puzzle game with a technological twist that, from a lay perspective, looks like it runs on devilishly difficult code. Putting together 3D maze puzzles for gamers to navigate surely isn’t much of a task for the modern programmer, but punching holes through physical dimensions with the portal gun - holes you can see through, jump through and turn into an infinite spatial loop - could be a serious programming pain for a handheld system.

Although this iPhone experiment lacks the special effects of throwing a portal about the room, and carrying around the fancy Aperture Science-designed hardware, the most important aspect of this game’s unique puzzle mechanic has been achieved.

A couple of simple buttons place the blue and orange portals within the walls, floor and ceiling, and while this early code stutters a tad when crossing the event horizon of your freshly opened portals, the fact is they work.

Right now the controls feel bolted on for the sake of testing, rather than carefully designed for intuitive user interface, so it seems entirely unfair to criticise this early build of the game in that respect.

That said, the two independent portal buttons are a superb idea. Anyone who’s played through the original will still have bruised shins from kicking yourself after pressing the wrong portal button and closing the gateway you just spent five minutes attempting to open across the other side of the level. That’s nigh on impossible in the iPhone port thanks to the wonderfully simple and obvious fire buttons.

Fans of the game will find the example level we played through to be very recognisable - matching those seen on the PC and Xbox 360 perfectly, from texture to layout. And, of course, no trip through a portal would be complete without your good friend the companion cube, which is a doddle to pick up, carry and put down, following you around the 3D physical enigmas with ease.

Everything else pretty much seems like a technicality. Some bug fixing, recreating your journey through the testing facility, maybe adding in the sweet voice and sarcastic dialogue of GLaDOS, refining the movement controls, graffiti about a cake, and the job’s a good ‘un.

That’s not to say these refinements wouldn’t take a lot of work, but the foundations are at least rock solid.

There are plenty of quirks to be worked out, for sure, not least of all being an official license from Valve. However, the original developer is well known for its tolerance of homebrew and independent spin-offs of its games. If there was one big company out there that was likely to endure a false idol built in its game’s image, it’s Valve, so keep your fingers crossed that we’ll all soon be enjoying a slice of iPhone cake with our good friend the companion cube. 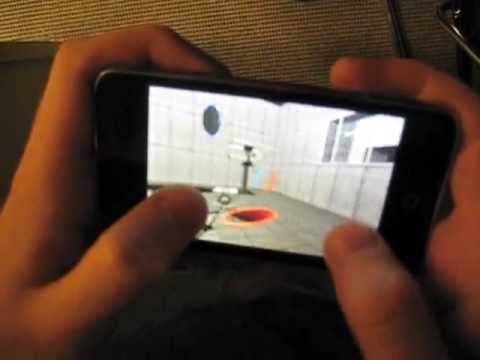