It's one of the biggest games and perhaps the single most exciting release of the year.

We're totally jazzed about the game, which has lab rat Chell facing off against Aperture Science's evil AI GLaDOS with a wormhole-producing handgun, but we'd love it even more on our iPhone.

But, truth be told, the humble first-person shooter (and its portal-based puzzle variants) isn't a perfect fit for the device. The iPhone's lack of buttons and tiny screen makes iOS shooters a tough sell.

So what if we could tailor Portal to the device, matching Valve's iconic art and razor-sharp wit to a number of games and genres that really work on iPhone?

We've done just that - here are some potential ways for Valve to bring Portal 2 to iPhone, without just porting Portal. 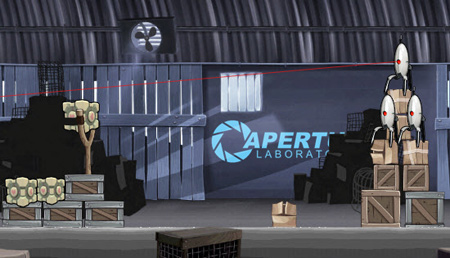 We all know that the best way to knock out a nuisance turret is to lob a weighted companion cube from afar. Whether you're relocating it through space via a handy portable wormhole or just lobbing it over a wall, these heart-sporting cubes are perfect for knocking turrets down.

In Angry Turrets, you use a springy catapult to launch your friendly cuboid pals across Aperture Laboratories test rooms to smash automated machine guns or dislodge the structures they're precariously standing on.

As the game goes on you'll encounter some trickier situations, like impenetrable walls erected between your cubes and the turrets. To get through you'll need to tap out two portals and fire a cube through quantum space to reach your enemy. Lasers and pits of toxic goo stand in your way, as well. 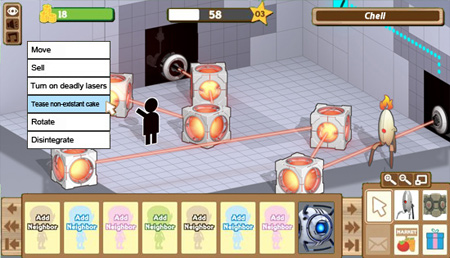 Do you think these menacing scientific mega-complexes just run themselves? Not so! They exist thanks to a delicate balancing of government funding, endless administration, and, of course, a central AI who's gone a bit loopy.

In GLaDOSVille, a freemium timesink for iPhone, you need to make the most of your financial backing. You can spend some of your budget on devious puzzle pieces like turrets, deadly lasers, buttons and fiery death pits.

Eventually, as your test subjects finally outsmart your brain-busting shenanigans, you'll be awarded extra cash from the state for meeting targets.

Especially sweet when you know you're getting the money over those jerks at Black Mesa.

You'll get more cash if it takes your lab rat longer to complete - like puzzles involving propulsion gels and body-flinging spring boards - and less for quickfire solutions.

But you'll soon work out that the best way to make money is to come back every five seconds, planting and harvesting simple companion cube brain-scratchers, until your entire social life degrades in favour of GLaDOSVille.

But it's okay, because it's for science. 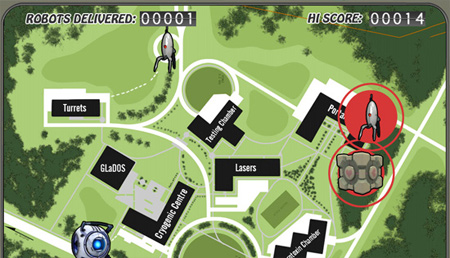 It's been a few years since Portal. Chell's been in a deep cryogenic slumber for several years and the Aperture Science labs have degraded a touch. Well, plants have taken over, debris is scattered everywhere, and most of the test chambers resemble post-apocalyptic nightmares.

So GLaDOS needs some help getting things up to scratch, which includes directing different robots to different areas. As Chell makes her way through more devious and tricky stages, Portal's manic AI needs to chuck more and more bots at her, sending deadly turrets to the turret facility, and directing companion cubes to the testing chamber.

It's your job to make sure they get to their designated buildings, and in one piece. Use your pinky to draw out lines for the bots, making sure not to cross any paths and cause unsightly collisions.

Great fun, until the screen turns into a spaghetti of crossed paths, alarmed robots, and near misses. Not suitable for those with high blood pressure. Or a penchant for tossing expensive iPhones in a fit of rage when narrowly missing out on a high score. 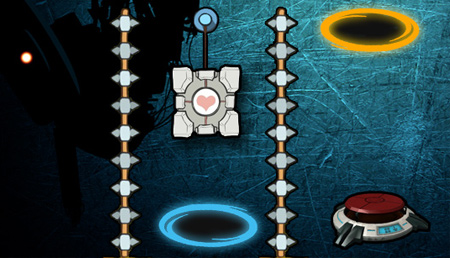 A smart, thoughtful series of puzzles that has you guiding a companion cube onto a big red button. It's your job to cut the rope that the cube is dangling from, and guide it - past lasers, through portals, around spiky walls, and over vats of acid - to the goal.

Yes, its three-star goals, just-one-more-go compulsion, and vice-like grip physics will make some critics think its in the same league as Angry Turrets. But those people are silly, and should be euthanised.

Cut the Cube isn't about pointless destruction and endless flinging. It's about precise movements, forward thinking, and logic. A bit like Portal, really, which would make it the most fitting title of the lot.
Next Up :
Win a Million Lords prize pack worth 50 USD in our latest giveaway