Today, a new Sync Pair has arrived in Pokemon Masters, Unova Champion Iris & Hydreigon. Alongside the duo, players can also expect another event to battle their way through as well as a trailer that teases the impending introduction of Kalos Champion Diantha & Gardevoir.

Iris & Hydreigon will be available in their own Spotlight Scout until April 1st. They are a 5-star Tech Sync Pair with access to Breaking Swipe, which will lower the opponent's attack whilst another move, Snarl, will act similarly but lower Special Attack. These attacks synergise well with Hydreigon's Sync Move, Triple Threat Dragon Rush, which dishes out additional damage the more the target's stats have been lowered.

The latest event is called The Shining Heart of Dragons which will feature Iris, Diantha and Lance. It will see players completing battles to net themselves in-game items whilst unlocking additional parts of the event's story. To coincide with The Shining Heart of Dragons, players can also get up to 1000 Gems and other rewards simply by logging into the game on daily basis.

With the addition of this version of Iris, every region's champion is now represented in the game. To celebrate, DeNA has released a trailer that features all of them. You can check that out in the embedded video below. 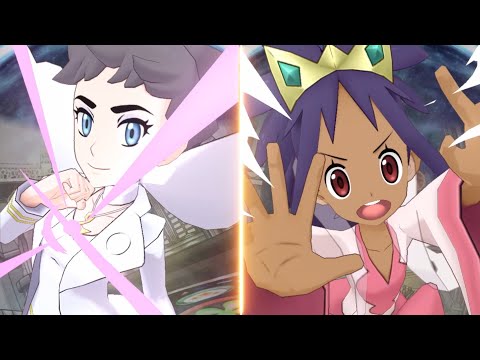 Finally, in early March, a Retweet Rally was held, promising players various rewards if the target was reached. It was of course, so if you log into the game between now and March 30th, you'll get 3000 Gems and 60 5-Star Guaranteed Tickets, which will net you two 5-Star Sync Pairs.

Looking for more excellent RPGs that you can play on the go? Here are 25 of the best available for iPhone and iPad
Next Up :
Hunt Royale is an upcoming Battle Royale game by BoomBit that's heading for Android and iOS