How do I catch a Detective Pikachu in Pokemon Go?

The Detective Pikachu movie is apparently pretty good. I mean, after that Sonic The Hedgehog trailer came out it was always gonna do pretty well, because it wasn't the Sonic The Hedgehog trailer. To celebrate the movie, Detective Pikachu is now catchable in Pokemon Go. I mean, it's just a Pikachu in a detective hat, but that's not the point - Pokemon in hats are absolutely adorable and Niantic should put more of them into Pokemon Go.

All of that poses the question though - how do you go about catching Detective Pikachu in the game? Rather than popping up in the wild like most of the other little critters you've caught, there's a little bit more effort required on your part to bag a Detective Pikachu. 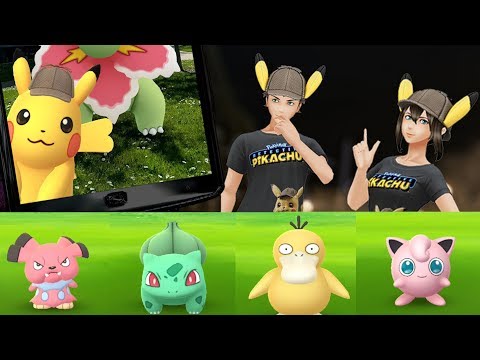 The update also includes a bunch of other new things to unlock. Like Detective Pikachu, though, the new content is only available until May 17th, so make sure you get stuck into it before the end of the week.

But how are you going to bag yourself a Detective Pikachu? Click to expand the list and you'll find out everything you need to get a Ryan Reynolds-inspired little fuzzy yellow fella on your phone.

1
How to catch a Detective Pikachu

First up you're going to want to open up the game's AR camera. You're not going to come across a Detective Pikachu in the wild, but they will photobomb your other Pokemon. Take a bunch of photos to get your quest started.

Don't worry if you don't get a Detective Pikachu straight away, and don't fret if you can't tell. The game makes a big song and dance when one of them pops up in a photo, so you're unlikely to miss it. Once that happens, head back to the game's main map.

There should now be a Detective Pikachu on the map, which you can try and catch in the same way you would any other Pokemon in the game. Manage to do it, and you'll have yourself a Detective Pikachu. Fail and you'll have to repeat the first few steps until it happens again. Unfortunately though you only get one chance a day, so you're going to want to make them count.