Hello everyone, and welcome to our trailer breakdown for the upcoming movie Sonic The Hedgehog. It's a movie all about everyone's favourite hedgehog called Sonic, and it features everything that made the series so exciting. Don't believe us? Then check out all the secrets we spotted in the trailer right here.

One of the most important parts of the Sonic lore revolves around human people. If you've played a Sonic game where you didn't interact with a human in a positive way, then you've never played a proper Sonic game. The trailer makes sure you know from the outset that there are people in the film, so that's good.

Sonic has always been pro-establishment, so it makes sense to team him up with a police officer as soon as possible. Especially a police officer played by the guy who was Cyclops in the first three X-men films. There's also a joke about a speed gun, because…

Sonic games are all about going as fast as you possibly can. The first few games are really slow, but after those the developers realised that going as quickly as you can was all that mattered. Seriously, some of them you just push forwards in. It's ace.

Another important part of the Sonic mythos is spines. Everyone remembers where they were when they first found a Sonic spine. Gosh those were wonderful times. By the looks of it the spines in the movie, just like in the games, contain electricity. Because speed and electricity are the same thing, I imagine?

Oh thank goodness, it looks like the Sonic movie is going to be a war movie. My favourite Sonic game, and yours too no-doubt, was the one where there were loads of tanks and uniforms. And guns. Sonic games were always amazing when they had guns.

This one's going to have a special place in the heart of any Sonic fan. Jim Carrey isn't just in the film, but he's pretending to be funny Jim Carrey like he was when he started his career (instead of creepy conspiracy theory Carrey like we have now) - around about the time when the original Sonic game came out. Talk about nostalgia! And that moustache! Classic Carrey.

Wow! I'm amazed they put this one in. You probably haven't noticed, but inside every robot you smashed in a Sonic game, there was another smaller robot inside of it. And that happens in the film too! There's a smaller robot inside a big robot. And for some reason Sonic is more worried about the small robot than the big robot, so you know it's going to be trouble.

The first time you see Jim Carrey, you get to see him for 24 seconds. That's more than ten percent of the entire trailer in one go. As everyone knows, Jim Carrey was the main character in every Sonic game apart from Shadow the Hedgehog because even I can't pretend that wasn't a pile of horse crap.

Hahahaha look now Cyclops has met Sonic and he's shocked because - well quite frankly look at Sonic in the trailer. Just look at him and think about how much money was spent on making him look like that. And now there's a joke because Sonic can talk - not like Cyclops would be horrified the second he walked into that room because LOOK AT SONIC. WHAT IS THAT!?! 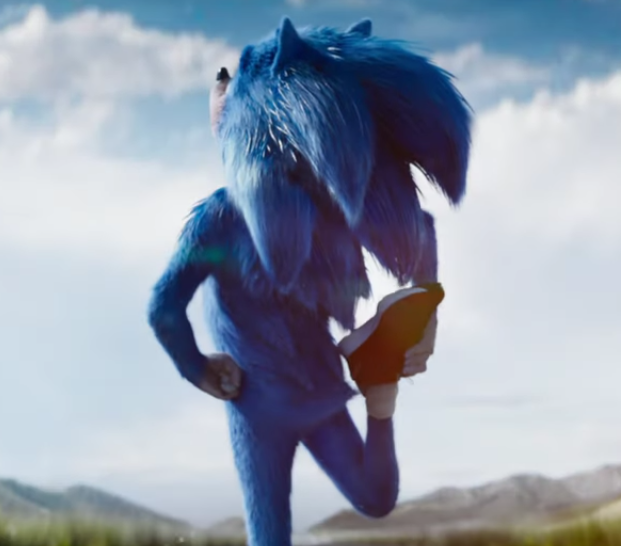 But he's wearing an iconic red coat. I mean, he's thin, unlike Doctor Robotnik who is literally - and I don't want to spoil anything for you here - THE SHAPE OF AN EGG. I've watched the trailer five times now and I'm so exhausted and confused and sweaty.

With a bigger moustache. The end.