Developer Valorware, of 9th Dawn III: Shadow of Erthil fame, has announced its next release; a dungeon-crawling anime-inspired RPG called Pinku Kult: Hex Mortis that puts your party of modern-day heroes against the occult until you finally take on Hell itself.

Pinku Kult is all about the alternative, sporting a very unique art style that somewhat takes from anime but also dabbles in a weird gothic look too, each character is presented in a washed-out watercolour style that really makes the graphics come into their own. Speaking of characters, you’ll be able to completely design your own custom one from the ground up as they take up the mantle of the hero of Razore City. 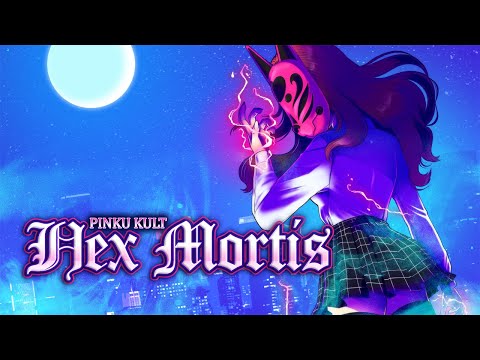 And it is here within Razore that your journey into the depths of Hell will begin, fighting off demons and monsters with your friends as you try to unravel the mystery of the elusive fox mask wearing girl. You’ll fight off those creatures using the game’s clearly old school JRPG inspired turn-based combat system, each of the characters you meet using unique abilities that will allow you to construct your party as you see fit.

To be quite honest, Pinku Kult seems to be inspired heavily by the popular Persona series, seeing a modern party of teenage kids have to do battle against massive demons, with each dungeon designed meticulously around what demon resides within it. All of these mechanics alongside the turn-based combat style of gameplay make it quite adjacent to that series, though I’d argue that Pinku Kult is far grittier and a good bit darker.

Regardless, if you’re a fan of Persona, turn-based JRPGs, or just an alternative-styled unique adventure with lots of great characters and sharp writing, Pinku Kult might be the game for you. It will release on June 1st for iOS and Android alike, alongside just about every other console under the sun.

Looking more great anime-styled turn-based combat? Check out our Top 25 best JRPGs for iOS!
Next Up :
Bloodline: Heroes of Lithas, a brand new card-based RPG, reveals details about its gameplay