Panda Arcade's Pico Tanks is a multiplayer arena game which can be played as duels, 2vs2 and 3vs3 matches. It's all presented from a micro-machines style, top-down perspective, and with a bright, whimsical colour-scheme which wouldn't feel out of place in a first party Nintendo title

Each match takes place in a small, brightly coloured arena — be that storage yards filled with containers, lush forest groves or more. Many of the objects within the arenas shake, rock and wobble in reaction to the mess you create, which really brings the whole thing together. 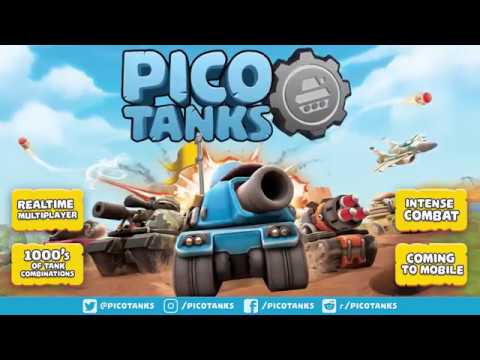 Perhaps the biggest feature to be discussed in Pico Tanks is the customisation. Tanks can be redesigned in two major ways, the first is their traversal technique. Aside from tracks there are Hoverplatforms, wheels and a whole bunch more. Then there's the weapons. Pico Tanks has a ton of weapon options, from gatling guns through to rail cannons. You can also load them out with certain special moves which charge throughout the matches.

I played through a few matches while at Casual Connect Europe earlier in the month and thoroughly enjoyed each of them. I was playing the 1vs1 dual mode, a mode which in other games can sometimes feel a little slow paced. This definitely wasn't the case, as even when the other player sent out decoys, or hid in the treeline, my weapons were firing and my abilities charging. And, if it's not going your way then you can change your loadout mid-game too.

Pico Tanks is launching on both Android and iOS later this year, with a soft launch due first in AU, NZ and China. It is currently in beta on both platforms, which you can apply to be a part of through the developer's Discord.

Interested in hearing more about upcoming games? We have a section for that.
Next Up :
Jigsaw Puzzle: Belgium Through The Lens lets players journey through Belgium via jigsaw puzzles, out now on Android

Pico Tanks, the fast-paced and intense 3v3 tank brawler for iOS and Android, has now soft-launched in select regions