Retro in all the right places

You're just an ordinary dude called Paul who's forced into trotting off on an epic adventure to save humankind from an alien zombie invasion.

No, not you personally - your character in Pixel Paul, a brand new retro-inspired point and click adventure which just launched on mobile.

If you grew up playing games like this, you'll feel right at home. From the art style right down to the chip sound audio, Pixel Paul is a real love letter to retro point and click adventures.

We'll give you our definite opinion in the full PG review shortly, but, in the meantime, check out what our community in the App Army made of it.

This is a great little game. There's no hand holding or tutorials, it just drops you into the story and gives you enough information to figure out what to do and where to go.

So far there have been zombies, skateboards, aliens, and an unsuspecting hero called Paul, who has to battle a fearsome foe with nothing more than a cheeky sense of humour.

The puzzles are a case of trial and error. I've actually made more progress by trying different combinations of items than actually figuring it out using my brain.

Take the flat tyre on the van, who would have thought that the fix was to jack the front up and then pop a skateboard underneath? 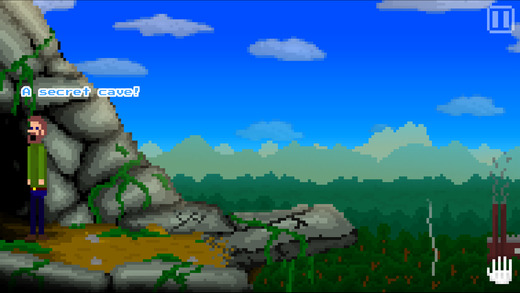 It's all good though and I'm really enjoying it.

It seems okay so far but, while I like retro games, it just feels unacceptable to have a game without voice acting in 2016.

The story is quite fun and I love anything to do with zombies. While I'm not a fan of the music, it's what you'd expect from a game like this.

There isn't much of an introduction to the story (only that you need to get out of the city) or what you have to do. The puzzles aren't that difficult but are good fun to work out.

This gets a bit frustrating if you accidentally tap somewhere you don't want to go.

I find the controls a little clunky, but I like the retro graphics. There should be voice acting though.

It's a throwback to games of yesterday, with retro pixelated visuals and a chiptune soundtrack. The puzzles aren't that tough so you won't be stuck for long.

There's a lot of silly humor and if you pay attention you'll notice little nods to other classic games and characters. I also like that you actually see Paul's arm move when using the mask and that you hold whichever item you need to use in your hand

The controls might bother some who are used to characters zipping across the screen, and being unable to speed up the dialog becomes a pain at times. But it's a short sweet trip down memory lane that you mostly won't mind taking.

Your mission in this retro-inspired point and click adventure is to find a cure for an alien zombie bite. The puzzles aren't too difficult but at times they can be a little obscure, which leaves you trying to match items in your drop list to an object you think should be used.

Though it flows along nicely with some good humour in places, the game has a few flaws and doesn't quite do it for me.

Yes, the retro pixel visuals are okay - I understand it. But the music is dull and there are no voices.

Once you've read conversations you have to be so careful not to touch the screen again or you have to wait for it to be over a second time, and you can't skip it. And I hate to say it but zombies are nasty critters, they don't stand around ignoring you - they attack.

It's a good idea but needs more work.

The gameplay and pixel art remind me of The Last Door - except that's not quite so gruesome and a lot more colorful. :)

The visuals and sound are lovely and really pop, and I really like the humour - there's a genuine LucasArts vibe.

It handles pretty well on an iPad Pro but I found the iPhone controls a bit janky.

The puzzles are pretty easy but an equally important part of an adventure game is the story and this game certainly delivers there. I just wish I could skip the dialogue sometimes.

The App Army is Pocket Gamer's very own community of mobile game experts. Each week, we provide them with a bunch of free codes and early access to the hottest upcoming games so they can provide their thoughts in features like this. We also host regular community-driven events with them in mind, like the Mobcrush stream, tournaments, and multiplayer evenings. To join, simply follow this link to the page on Facebook and request access. We'll get you in right away!
Next Up :
Need friends for Mario Kart Tour Multiplayer? Share your friend codes here! (30k+ codes!)