EGX 2014: Omega Agent is a jetpack training Virtual Reality sim from the makers of The Room

And it made me feel a bit sick

I feel sick. It's sort of a good sick though. It's a sick tinged with excitement.

The bile in my guts might be confused about how the world is moving and we're not, but my brain juices are wishing that I didn't feel queasy so I could keep playing Omega Agent, Fireproof's Gear VR-powered jet-pack sim.

Except it's not actually Gear VR powered. It's running through an Occulus Rift because Fireproof isn't allowed to bring the Samsung dev kits out into the wild.

The game has a pretty simple central idea. You're flying a jetpack around a cartoon-ish city scape. You've got a controller - I'm playing with a 360 pad - and you swoop around the skycrapers and streets.

The tutorial walks me through the basics. I fumble with things to start off with. One stick controls the direction you're heading in, another twists you around. One of the shoulder buttons controls your thrust.

Straight away I end up soaring above the buildings, partly on purpose but mainly because I haven't quite got to grips with the controls yet. 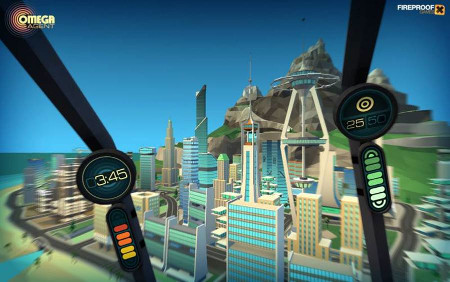 I fly through some rings, use my jetpack mounted shotgun to take out some spinning targets. It's pretty standard stuff, but the fact you're swishing around a city, able to turn your head and look at the buildings as you soar by, turns it into something special.

The tutorial ends and I take my jetpack for a spin. I let go of the burst and drop down to street level, and the lurch in my stomach is confused and joyous.

The city isn't huge, but it feels like you could lose hours just darting through its streets, visiting the waterfall that cascades out of the mountain nearby. Exploration that would be mundane without the headset suddenly becomes something new and interesting.

I want to see if I can squeeze through the windows. I want to see how far away from the towers I can get. I want to land on top of the tallest building and just look around. Because I can.

Whether or not that novelty will last is hard to ascertain. All I know is that when I pull the headset and earphones off and the chaos of EGX punches my already confused senses, I want to play again.

Granted I want to play again after a sit down and some fresh air, but Omega Agent shows off what VR tech can do best. It turns the mundane into the fantastic.

Show me a first person jetpack game that doesn't require you to wear a helmet and I probably won't care, but let me float and thrust around in a world that only I can see and you've got my interest.

I shuffle away from the busy stand impressed. I don't think Omega Agent is ever going to make anyone buy a Gear VR by itself, but it showcases the potential of the technology brilliantly.