There was a time when it felt like there wasn't much left to say about RuneScape. You sort of got the feeling that everyone has already had a go, formed an opinion, and stuck around or moved on. Well, everyone with a PC, anyway. Which is why Old School RuneScape making it to mobile is such an intriguing prospect.

It's one of the biggest, longest-lasting games in the world coming to the biggest platform in the world. And that's going to open it up to an audience that it might not have been able to tackle before.

Which leads to a slightly odd dichotomy at the core of the game. Because Old School RuneScape is so entangled in its community that adding new members, especially ones whose main place to play is their phone or tablet, could be something, could have pretty lasting effects.

The big question though, the one we really need to get out of the way, is whether or not the game actually works on mobile. And the answer is a yes, albeit with a little proviso - the controls here aren't perfect. The larger the screen you're playing on, the less that's going to rankle though.

The UI you're poking and prodding at, which is mainly made up of slots and options spread around the edges of the screen, is the same one you're going to have been clicking at when you were playing the game on PC. This is true cross-platform play as well - one account and you can play on your computer, Android, or iOS device.

It's interesting to see a game that's so focused on giving its community new options to play. And if you're a player already then there shouldn't be anything stopping you from grabbing the game right now. Which leaves us the other avenue to explore - what is Old School RuneScape Mobile like for new players? 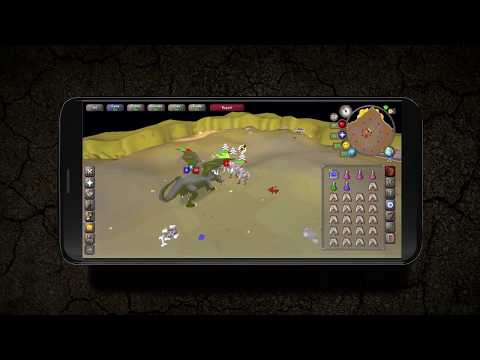 The first thing you'll notice as a new player is that there's no concession here for the platform. That was always going to happen, but at the start in particular it does show the age of the product underneath. There's a slight creakiness to proceedings, and it's where the little cracks start to show.

But these are just the smallest of imperfections. Because the fact of the matter is you're getting an enormous amount of content here, and the drudgery of the first couple of hours is something that exists in pretty much every MMO.

Another slight niggle is going to be the look of the game. It's decidedly old-fashioned, which is part of the charm to players who've been with RuneScape since the start, but is probably going to leave modern mobile gamers feeling a little cold.

None of this is to say that you shouldn't pick up Old School RuneScape Mobile, not by a long shot. These are just things you should know before you take the plunge, and the fact of the matter is if you do leap in, you're going to end up playing on your phone, tablet, and computer before very long.

And that's because Old School RuneScape is just a bit brilliant whatever you play it on. Years of expertise has clearly been woven into everything the game does, and if even a single idea it has manages to get under your skin, there's a very good chance that all of them will.

It might not have the spectacle of more modern experiences, but it still manages to capture that first thrill of playing together. And now you can play together wherever you are, which is pretty flipping awesome.

One of the best MMOs comes to mobile with most of its charm and playability intact
Next Up :
Hundred Days review - "A success for the management genre"