Nintendo Labo's Variety Kit is surprisingly detailed but will it be worth the money?

As one of two kits available in April, two new trailers were recently released for Nintendo Labo. You can find out the new dirty deets on the Robot Kit right here, but the Variety kit is equally as impressive.

As I predicted a while back in Pocket Gamer's Podcast, the RC car is controlled by the Joy Con's HD Rumble, giving you the chance to choose the car's direction by fiddling with the vibration. You can also battle a friend if you've got two sets of Joy-Con controllers and personalise your car all funky like.

The Toy-Con fishing rod is pretty self explanatory, but the cool thing here is that the Switch responds to the line, reflecting on-screen when you tilt the rod from side to side. Once you feel a vibration, just pull back on the rod and reel in your catch. Weirdly, you can create your own fish by cutting up paper but Ninty's keeping that magic under wraps for now.

The Toy-Con house lets you play with an alien-looking creature that's moved in by shaking the structure and tilting it from side to side. The button block, cable block, key block, and crank block each affect the room in a certain way too, and changing up where you put them will alter what it does. Combine a bunch of blocks and the room changes altogether, so it's surprisingly diverse.

Labo's motorbike also performs as you'd expect it to. You need to lean into corners to steer, use the available controls to rev up your engine, and take part in a bunch of driving challenges (either solo or against AI). Using the 'scanner' lets you craft the stadium's terrain in the shape of whatever you scan with it. Yes, I know at least one person will likely misuse this but it's a neat feature. 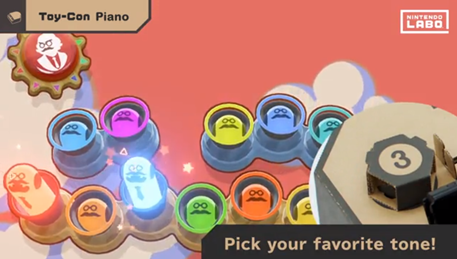 Finally, the Toy-Con piano. Though we didn't get a look at how it works too intimately, we did find out more features. Rocking the piano gives your notes vibrato, inserting different nobs gives you new sound effects to play with (like cats and grandpas), acoustic mode lets you play sound with your Joy-Con's vibration, and there's a huge recording studio for you to muck about with. Oh, and you can then conduct your melodies using a baton.

Though I still remain skeptical of Nintendo Labo's longevity, I admit it's looking more and more fun and for children especially it'll be a blast. It had better be made of some special, extra-strength cardboard for $69.99 though.