More Next Level Gaming in association with Razer
By Stephen Gregson-Wood
| Dec 2, 2022

Back in October, Razer announced the Razer Edge, a dedicated 5G mobile gaming device set to release in January 2023. It's effectively a tablet that comes bundled with the pro version of the excellent Kishi V2, all for $399.99 for the WiFi-only version. Pricing for the 5G edition will be announced in January by Version. Regardless, it gives you plenty of choices for how to game on the go for a reasonable price.

It boasts some impressive specs, and there's a chance that if it delivers on all of its promises, it could become the go-to and best device for mobile gaming. Today we'll check out some of the reasons it promises to set itself apart from the rest of the competition.

Under the hood of the Razer Edge sits the Snapdragon G3x Gen 1. At the time of writing, the Razer Edge is the only device that houses this chipset and is purpose-built for gaming. It is an active-cooled gaming chipset with a 3 GHz Kryo CPU, which means it's designed for enjoying Android games at high framerates for extended play sessions. You won't have to worry about it turning into a hand warmer or watch the framerate plummet after playing for more than an hour.

The Razer Edge sports a 6.8-inch FHD+ AMOLED 144Hz screen. If that's just a jumbled sequence of letters and numbers to you. Allow me to explain. The screen's specs mean that not only will your games look better, but they will also run more smoothly than on most devices currently available.

And all that beauty and buttery smooth gameplay will come at a cost of less than $400. Sure, there are other devices out there that also offer higher resolutions for mobile gaming, but they're often double the price of the Razer Edge, if not more. Plus, they don't come bundled with a controller, so you're looking to invest even more money if you want to include one in your mobile gaming setup. 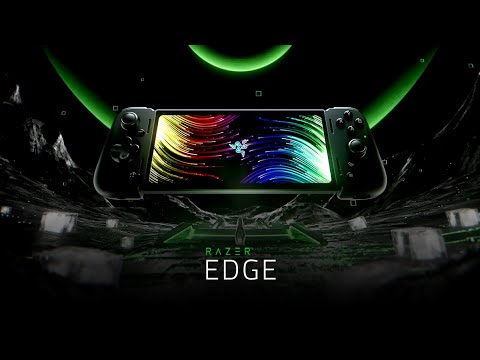 Suitable for all kinds of gaming

Not only is the Razer Edge flexible in terms of control input, but it's also a great option for the various types of gaming you can enjoy on your phone. Firstly, and most obviously, it should be able to handle anything you download from Google Play without issue, thanks to its chipset (more on that later).

Elsewhere, if you want to sync your Razer Edge with your Xbox Series X for remote play, it's a great candidate for that. And likewise, if you want to play Xbox Game Pass titles through the Cloud, the Edge is equipped for that. In fact, if you're in America and buy the 5G version, you can theoretically enjoy Game Pass on the go without being limited to your home Wi-Fi.

Finally, with the Razer Edge's impressive specs, it's a great option if you dabble with emulators on your phone. The chipset should be able to handle most emulators and run games through them beautifully. Plus, with the included Razer Kishi V2 Pro, you can enjoy classic games with a controller, as originally intended.

A potentially superior choice to your phone

Let's face it. There are some great mobile games out there, but, ironically, playing them on your phone isn't always the best choice. The main reason is that gaming drains your battery pretty swiftly unless you carry a battery pack around. It also takes up a lot of storage space if you want to install several big games. In theory, you won't have to worry about that with the Razer Edge, which promises to last for hours on a single charge and includes 128GB of internal storage and support for a MicroSD of up to 2TB.

The other issue with using your phone for gaming, particularly multiplayer titles, is that doing so might eat into your data plan, resulting in a nasty bill at the end of the month. If you're in America and purchase the 5G version of the Razer Edge, you won't have to worry about that.

More portable form factor than the Switch and Steam deck

Of course, the Razer Edge isn't directly competing with the Switch and Steam Deck, but it's an interesting point regardless. That means it's a far more portable prospect than other handheld devices on the market. In fact, without the Kishi V2 Pro attached, it should slip neatly into your pocket.

As mentioned, the Razer Edge comes equipped with a Kishi V2 Pro. It is an upgraded version of the regular Kishi V2 that includes HyperSense haptic feedback and a 3.5mm headphone jack. It's an excellent controller that performs well even under longer gaming sessions, so it's great Razer has chosen to include it with the Edge.

But you're not limited to using a pad or playing controller-compatible games. The Razer Edge also boasts a touch screen that promises to be super responsive to each tap and swipe. Naturally, this is incredibly important to anyone playing games at a high level, where any minor delay could be the difference between a narrow victory or a painstaking defeat.

Next Up :
App Army Assemble: Isle of Arrows - "Does tower defence meets roguelike make for a memorable combination?"

The best shooters you can enjoy with a Razer Kishi