If rumours circling today are to be believed, there are a number of App Store developers who are buying their way to success in Apple's top 25 lists.

An anonymous poster on the Touch Arcade forums, simply known as 'walterkaman', has alleged that a company is offering developers a surefire way to get into the top 25 lists on the App Store - and it involves devious means.

For $5,000, said company will allegedly utilise bots that will download a developer's app over and over again until it has broken into the top 25 charts. At this point, the developer's app will have received sufficient customer exposure to attract downloads from real people.

An unnamed source confirmed to Pocket Gamer earlier that it had also been approached by a company which offered a similar guaranteed placement service to the one outlined above. 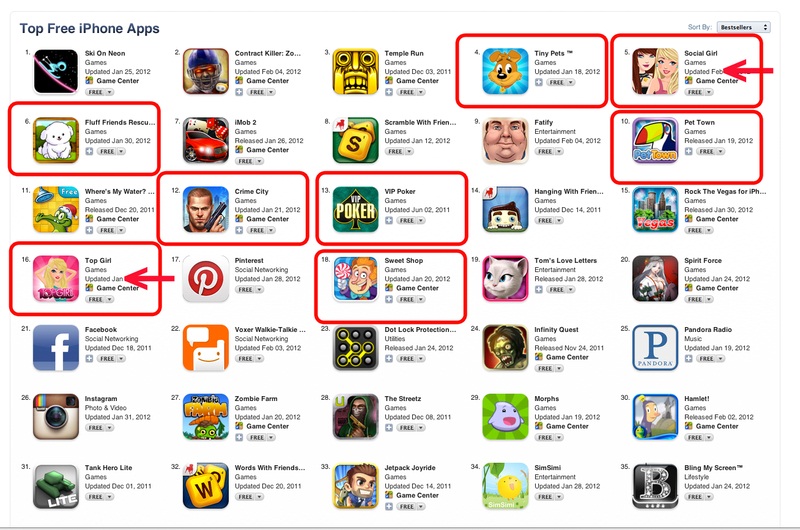 The Touch Arcade forum poster alleges that a number of big-name developers are already using the service, including Top Girl dev Crowdstar.

However, later in the forum thread, Crowdstar co-founder Suren Markosian jumped in to defend his company's position.

"We all spend hundreds of thousands if not millions promoting our games every month using legitimate advertising channels such as flurry, chartboost, iAds, etc," Markosian said.

"While I sympathize with the smaller developers who may not have as much funding as we do and feel that we are getting a free ride the fact is we are spending significant marketing dollars to achieve top ratings."

The anonymous poster even alleges that Apple is already aware of the issue, and has banned a developer called Dream Cortex for employing this bot-farming tactic.

Dream Cortex saw its games removed from the App Store last month, and it originally said that it was "not sure what is happening" when questioned by Gamezebo. Pocket Gamer has contacted Dream Cortex regarding the allegations.

Unfortunately, the poster removed the name of the company behind this bot-farming scheme before Pocket Gamer could get to it. However, a quick Google search pulls up a forum post which appears to closely resemble the information given.