The (free) nightmare before Christmas

In the run up to Christmas, Pocket Gamer has teamed up with the developers behind some of this year's best games to give you ten award-winning iOS games for free. Come back every day for the next two weeks to get your games.

The fourth entry into our app-vent calendar is Lucky Frame's wonderful puzzly roguelike The Nightmare Cooperative. You can grab it right now from the App Store for nothing at all. 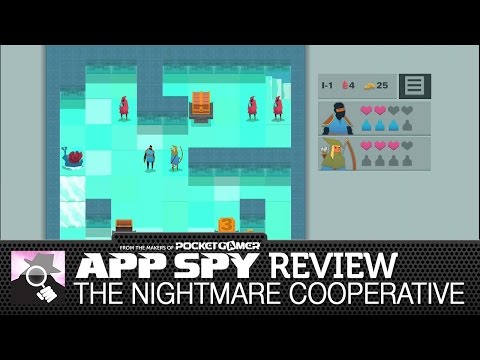 The game is a dungeon crawler that takes its cues from a similar playbook to slidey number puzzler Threes!

You swipe on the screen to move your band of adventurers around, aiming to nab treasure, smash monsters, and get to the exit.

But your heroes move as one, and they're rarely bunched together in the same place. So while a swipe might send one of them to safety, it could send another into an acid pit at the same time.

Sliding into a monster smacks it, but the fiend will damage your adventurer as well, making those hearts and spells all the more important.

It all blends together to make an intriguing game of risk and reward. You could go nab that treasure, but there's a very good chance you'll lose a couple of members of your party on the way.

Of course, there could be a couple more waiting for you once you make it down the stairs, but are you willing to risk it?

At review we gave the game a Gold Award and called it "an excellent, sleek, mobile-friendly roguelike smashed into a slide-based puzzler, with a smattering of clever gameplay mechanics, all beautifully polished."

And right now you can grab it for absolutely nothing, so slide on over to the App Store and grab it, and head back tomorrow to get your next freebie.