It's been a particular issue for companies coming from the desktop space.

Even in tablet form, current Nvidia architectures such as the Tegra 2, as found in Motorola's Xoom amongst others, need to be charged significantly more regularly than iPads.

And that's the thinking behind the company revealing a twist in its forthcoming Tegra 3 (codenamed Kal-El) design.

Alongside the quad-core CPU (and 12 core GPU), there's a fifth CPU core: something Nvidia describes as a Companion core.

It calls this design Variable Symmetric Multiprocessing (vSMP), with the Companion core designed to execute tasks such as music playback, as well as low level activity such as email, Facebook and Twitter syncing when general standby mode, at very low power. 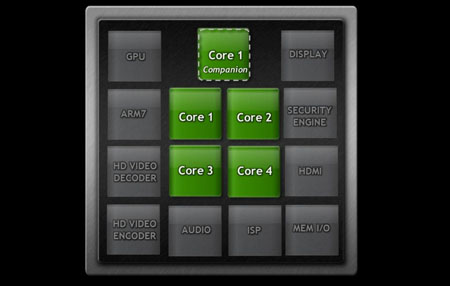 Significantly, all five CPU cores are the same ARM Cortex A9 design and can be individually enabled and disabled based on the work load, although the Companion core and the main cores can't run simultaneously. The Companion core is also set up differently as it's designed for low power operations, and has a maximum frequency of 500 MHz.

Use of the Companion core is automatic, and doesn't require any specific code, either to the OS or client applications.

Nvidia argues its vSMP design has many advantages compared to the asynchronous clocking used by rivals such as Qualcomm, whereby different cores run at different frequencies depending on the workload. These include cache coherency, a more efficient use of the operating system, and a less complex power design.

In this way, Nvidia reckons Kal-El will offer power savings of between 14 to 61 percent compared to Tegra 2, despite offering approximately a five-fold performance increase. 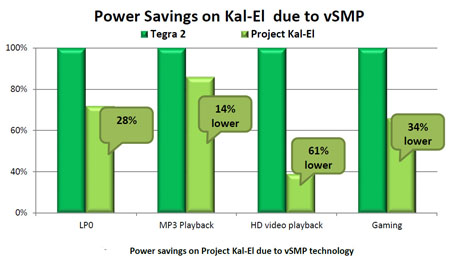 You can read more about the architecture, which is described in various whitepapers on Nvidia's website.