2013 looks to be starting off quite well for Pokemon fans across the world, or at least for those who live in Japan and North America.

At the end of December, Siliconera reported that a teaser in the current Japanese Pokemon Black/White 2 trailer indicated that a mysterious announcement was coming on January 8th.

We figured the announcement would be for Japanese fans only, since we've become used to that sort of Pokemon treatment here in the west, but an update to the official North American Pokemon Twitter indicates that isn't the case: 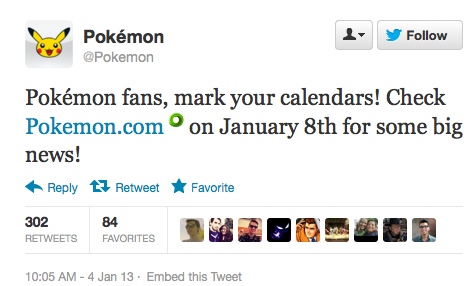 It's difficult to believe that the announcement is for a new game, as previous titles have been announced and released in Japan before making their way to Europe or North America.

Still, it would be rather a happy new year indeed if the announcement relates to a new game, or a port of an older Pokemon title like Sapphire/Ruby/Emerald.

Sadly, we don't know for sure if the teaser announcement is for a new game, a new port, or if it relates to something else entirely, but we do know that you won't have to wait long to find out what it's teasing.