Emulation and Android, all for under 150€

Back when Archos announced the GamePad at the end of August, it caught our attention.

A gamer-focused Android tablet with dual-analog sticks that retails for 150€ seemed very appealing then, and now that new hardware details and a hands-on demonstration have surfaced the GamePad has become even more appealing.

Add to this dual-analog sticks, a suite of buttons on both sides of the screen, and an HDMI output and it's clear to see what demographic the GamePad is targeting: Android gamers who were looking to spend $499 on a WikiPad.

The hands-on video below shows the GamePad being put through its paces, and it looks fairly impressive from its button mapping to N64 emulation.

Based on the hands-on, it appears that the gyroscopic tilt controls are slightly less than optimal, but the GamePad compensates for this by allowing players to map steering controls to either analog stick or any of the tablet's multiple buttons.

We still don't have a firm release date on the Archos GamePad, but it is expected to be available by the end of October. 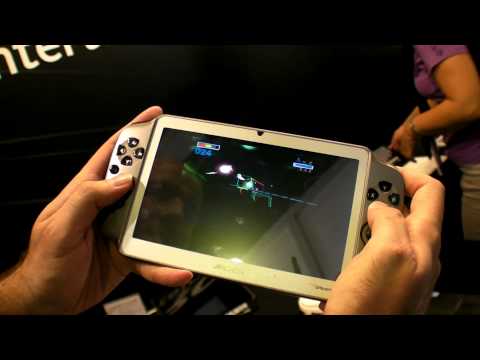