And some other things too

It's time for our #gameoftheday. It's an initiative where we tell you about an awesome game, you go and download it and have fun, and everyone feels like they've achieved something. Sounds pretty awesome, right? Well, it IS awesome, which is why we keep doing it.

Today's choice is genre smash-up Twinfold. Click here and you'll be taken to our #gameoftheday hub, where you can see all of the many, many games that have been awarded this prestigious title. They're all absolutely banging, because that's literally the point of a #gameoftheday.

Got your own suggestions for a game that deserves to be highlighted here? Then make sure you let us know in the comments section at the bottom of the article.

This one's a mashing together of a whole bunch of ideas from other games and genres. You've got sliding blocks, you've got roguelike elements, and you've got a load more stuff going on too. Somehow though, it manages to keep its vast array of ideas in check where others have failed.

You're trawling through tiny dungeons to get loot, but there are monsters and traps to avoid as well. And you can push your luck, sliding blocks with your moves to make the loot worth even more. But then you're also more likely to die, which is a right kicker. Throw in randomly generated levels to keep you on your toes, and you're left with a game that's likely to hang around on your homescreen for a good long while. 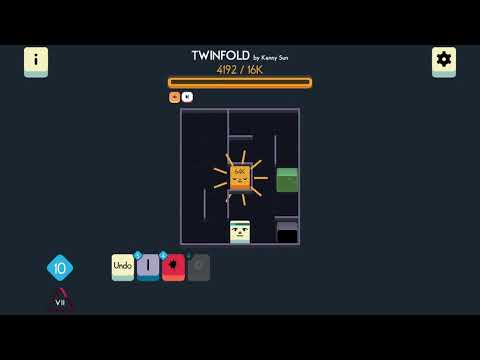 When we reviewed the game we said "Twinfold is fun enough, smart enough, and solid enough that it's well worth checking out." Click here and you can read our Twinfold review in its entirety. We're not saying that you have to, but we think you definitely should.

Keep up to date with the world of mobile gaming by checking out our news section right here
Next Up :
Horizon Chase Mobile Edition's new China Spirit DLC features new tracks and the Lightning car, available now