How did we ever play games before? 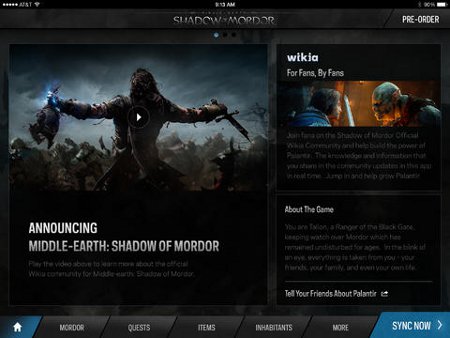 What's better than playing a game?

Playing a game while using a second-screen companion app, of course!

And what's better than using your fingers to gain access to the information on that app?

Using an app that eavesdrops on your play sessions, of course!

And with the iPad companion app for upcoming Tolkien-ignoring Lord of the Rings prequel console game Shadow of Mordor, you can do just that.

This slightly creepy tie-in app is called Middle-earth: Shadow of Mordor Palantir. It 'listens' to the part of the game you're playing and loads up the relevant Wikia information for that point.

The app is out right now for free. And while the console game isn't, you can still use the somewhat alarming recording feature to get more information on videos about Shadow of Mordor.