Social gaming giant King has announced it is to shut down five of its online titles in order to give more attention to its most successful games.

Though not impacting on its mobile line up – the Candy Crush Saga studio currently has three titles on iOS and Android – the move nonetheless suggests a shift to focusing on just a few key releases rather than a broader library of titles.

Up for the chop are Bubble Saga, Hoop de Loop Saga, Puzzle Saga, Miner Speed, and King Gold Games, with the change in approach coming just weeks after King pulled in-app advertising from its line-up.

Though not officially connected – King claiming at the time it was looking to provide users with "uninterrupted entertainment" – the two moves suggest an attempt by the firm is looking to consolidate its position as one of casual gaming's most profitable outfits. 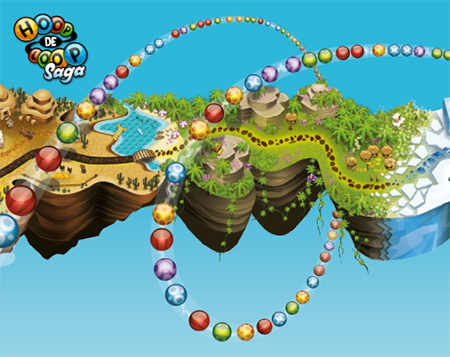 Hoop de Loop Saga is set to be closed

"In order to invest resources behind its most popular games and its forthcoming launches, King has decided to close some of its smaller titles next month," the firm said in a statement, with rumours suggesting the company is prepping for an IPO.

"The games affected typically have fewer players and, in some cases, were earlier iterations of the hugely successful Saga model that King has developed over the past two years."

Next Up :
Siege: Apocalypse, the 1v1 military strategy game, will release for iOS and Android early next year