We absolutely love smartphones and tablets here at Pocket Gamer Towers, but that doesn't mean we don't occasionally grumble about their less than stellar features like the often pilfering battery life.

Last month, Which? tested 101 different smartphones from some of the world's biggest manufacturers and came to the conclusion that Samsung's Galaxy SIII has the best battery life of any smartphone on the market.

This month, Which? tested 53 different tablets to see how long you can surf the web over wi-fi on each. This time around it was Apple's third-generation iPad that came out on top, thanks to a battery that allows 761 minutes of uninterrupted internet browsing.

The Motorola Xoom 2 Media Edition's battery came bottom of the pack, allowing a measly 221 minutes of browsing before curling up into the foetal position and crying. 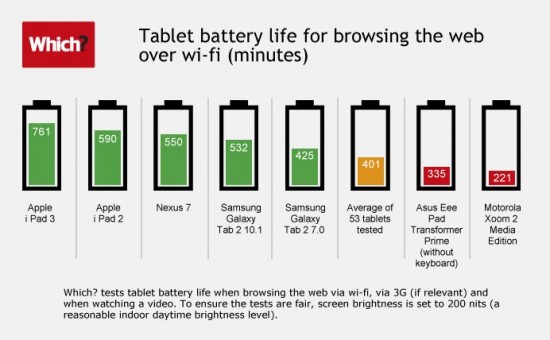