The same brain as the iPhone 3GS

Although the device itself doesn't look particularly inspiring, the concept of manufacturer Hardkernal's new Android-powered entertainment device is pretty solid.

Slashgear noticed the ODROID floating around the blogosphere. It's built around the same high-speed CPU as the iPhone 3GS (600MHz Samsung S5PC100 ARM Cortex A8), and also comes with 2 GB of storage, a 3.5 inch LCD touchscreen at 320x480 resolution, Bluetooth, wi-fi, SDHC card slot, accelerometer and an HDMI connector capable of 720p video output.

What the device doesn't have is cellular connectivity, positioning it more as competition for the iPod touch than the iPhone. Judging by the button layout the ODROID can be used in landscape or portrait orientation, presumably to ensure it is compatible with all the games and applications on the Android Marketplace.

It seems the developer Hardkernal might yet be looking for a manufacturer and/or distribution partner, as there's no word on if, or even when, the ODROID will become available, or what sort of price we can expect.

Still, it's a fascinating bit of kit, eh? 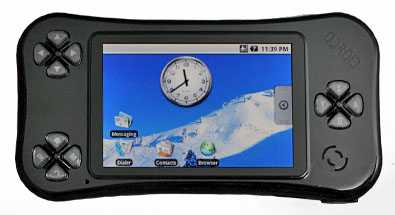