Drakkar Dev has teamed up with publisher NuOxygen to bring its shoot-and-slash arcade game Monster of Puppets to both the App Store and Google Play during May.

Darkkar Dev is the company behind the cult hit Guardians: The Last Day of the Citadel which we covered over the summer.

Its upcoming game is half Fruit Ninja and half carnival-style shooting gallery.

Monster of Puppets replaces the fruit with gorgeously rendered – and very cute – opponents such as werewolves, ninjas, and vampires in a quirky, Halloween atmosphere.

Unlike Fruit Ninja, these targets will attack the player if they are not dispatched quickly enough, which should add a nice challenge to a familiar style of gameplay.

Armed to the teeth

The tap-to-attack gameplay might seem simple, but the sheer arsenal of weapons that players have at their disposal should keep the most jaded of fruit slicers interested.

With shotguns, machetes, rocket launchers, lasers, freeze rays, and buzz saw traps to employ, there's almost no end to the mischief and possibilities that a player can have while fighting off hordes of leaping baddies. 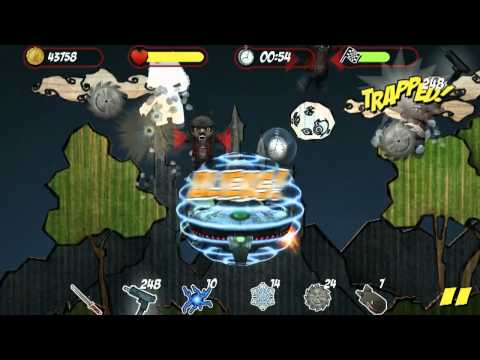 Subscribe to Pocket Gamer on
Next Up :
Delete After Reading tasks you with saving a video game in a text-based adventure, coming to mobile on March 14th

Use your fingers to slash, tap and shoot