Remastered with new weapons and outfits

Three weeks ago it was unveiled that Halfbrick Studios' classic runner Monster Dash would be returning to iOS for the first time since it was removed in 2017 due to some GDPR business. It initially soft-launched in Canada, Australia, New Zealand, Philippines and Indonesia but now it's available globally once more and has been remastered. The Android version of the game has also been updated too.

If you're a long time fan of mobile games you'll most likely be familiar with Monster Dash, given it was a fairly popular title when it released in back 2010. We reviewed it when it originally launched a decade ago, finding it to be a pretty good time.

The latest release of the endless runner isn't a simple case of just popping the game back on the App Store, however. Halfbrick Studios say they have also looked to improve the gameplay of the original with various tweaks being made to this remastered version.

This includes an improvement to the graphics of the game and you can see a comparison of this in the screenshot above. Beyond the look though, players can also expect to find a host of new weapons to shoot, costumes to wear and mini-game challenges to tackle as they play. 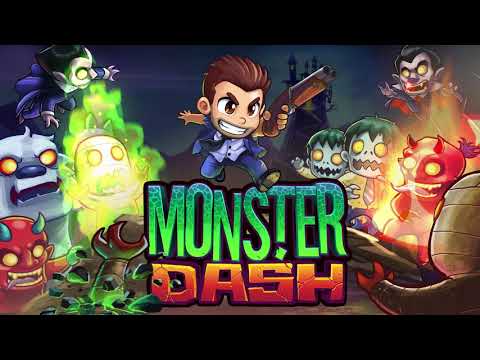 If you're unfamiliar with Monster Dash, it's an endless runner where you have to jump, shoot and dash your way through hordes of enemies. Playing as the wonderfully named Barry Steakfries you'll also collect loot and level up to increase your monster-slaying prowess alongside picking up various destructive weapons.

Monster Dash is available now over on the App Store and Google Play. It's a free-to-play game with in-app purchases.

On the hunt for other auto-runners to play on your phone? Here are 25 of the best available for iPhone and iPad
Next Up :
Letter Rooms adds an advent calendar to the anagram game, with a new puzzle to be released every day this December

Ghostbusters update for Monster Dash lets you play as Dr. Peter Venkman and suck up Slimers