Player1games has announced that Monkey Swingers has returned to iOS devices. The arcadey action game's return to the App Store will likely be good news to many since the game was well-received when it launched on the storefront the first time around.

The 8-bit simian swinging action arcade game takes inspiration from classic games, from its skill-based gameplay to its retro-styled aesthetic. That means the objective of Monkey Swingers is incredibly simple, swing from bush to bush and quickly climb as high as possible.

Likewise, the controls are also very straightforward, perfect for a touchscreen setup. You tap to hold onto a Bush as our monkey hero spins around in circles and then you release at the right moment to swing to the next piece of jungle foliage. After that, it’s only timing, focus and talent that’ll take you to the top.

On your way up there will be an array of boosts to take advantage of that will help you achieve increasingly more impressive heights and high scores. To gain these boosts you'll need to keep a keen eye out for bananas. These potassium-packed fruits can also be used to unlock different costumes to give your monkey a look that feels more personal to you. 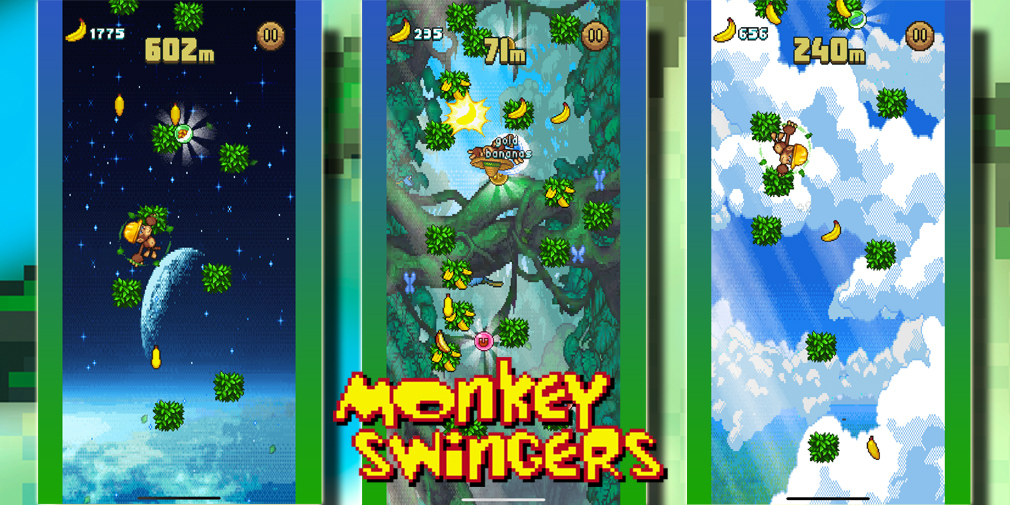 If you're the competitive sort, the game also supports Game Center, meaning you'll be able to compare your high scores with your friends and let them know when you've obliterated their best attempt.

Monkey Swingers is available now over on the App Store. It's a free-to-play game with in-app purchases.

From time to time Steel Media offers companies and organisations the opportunity to partner with us on specially commissioned articles on subjects we think are of interest to our readers. For more information about how we work with commercial partners, please read our Sponsorship Editorial Independence Policy.
If you're interested in becoming a Preferred Partner please click here.
Next Up :
[Updated] Shinobi Run Endless is a bloodthirsty endless runner that's available now for iOS