The ever-so strange but perhaps ingenious asymmetrical PvP Hello-Kitty-themed mobile game, Sanrio Miracle Match, has officially launched in Japan after opening pre-registration earlier this year. Miracle Match takes the adorable Sanrio cast, filled with plenty of cute stuffed animal designs that everyone knows and loves, and pits them against the “villains” of this setting as they run away and attempt not to get zapped by their magic wands.

I don’t know about you, but Hello Kitty would not be my first choice for an asymmetrical PvP title. Keep in mind, that this is a genre that includes stars like Dead by Daylight and Identity V, horror games at their core, even if one has a bit of a cutesy art style to it. But Miracle Match seeks to show that this genre does not need to be spooky to succeed, rocking a pastel palette full of pinks and vivid greens, sparkly and proud to present the child-like joy that Sanrio is known for. 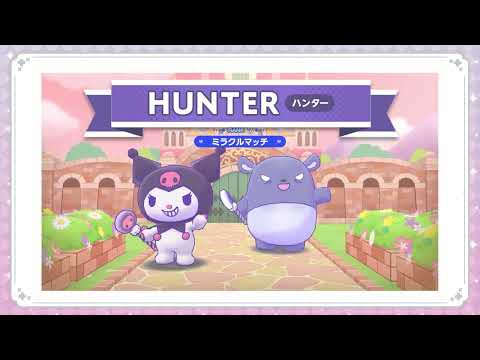 Despite veering super off course in comparison to genre contemporaries, judging by the gameplay, Miracle Match is just as much a genuine asymmetrical competitive PvP game as those two juggernauts though. It sports similar gameplay, with a group of 4 trying to accomplish objectives across a relatively wide map as one singular other player hunts them down and, in this case, zaps them with magic as opposed to the usual murdering.

It also features all of your favourite Sanrio characters and designs, along with original map designs that support the setting and are wonderfully fairytale-like. This gives the whole ride a very child-friendly vibe, so if the horror of this genre has kept you from getting into it, now’s an excellent opportunity to give it a go without all the blood and guts.

If you’re looking to do so, you can download Sanrio Miracle Match right now on Google Play and the App Store for free. Currently, it is only available in Japan, and there’s no word on a global release.

Looking for more child-friendly games for the kids? Check out our Top 10 best family games for iOS!
Next Up :
Artery Gear: Fusion, a turned-based RPG, is out now for Android and iOS globally