Hands-on with Metrico for PS Vita: A platformer in an infographic

A man walks into a bar chart

I do enjoy a good puzzle platformer, so I was excited to get my hands on the upcoming PS Vita game Metrico, at Gamescom last week.

The prospect of dashing and leaping around a series of infographics and graphs definitely sounded like my cup of tea, and having now played the first couple of worlds, I can confirm this to be the case.

If you enjoy being given the run-around, and slowly but surely piecing together exactly how to interact with the world around you, Metrico should be on your future shopping list.

Metrico is all about trial and error, and experimenting with exactly what makes the game's world tick. 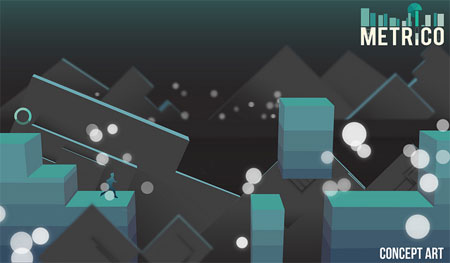 As you make your way through each level you'll come up against obstacles that block your path, in the form of bar charts that rise out of the ground, platforms that shift around depending on your movements, and plenty of pits to fall down.

The idea is that every single object in the world shifts around depending on how you move your character. For example, a platform might rise and fall depending on whether you are jumping, or slide across to form a bridge as you dash in a specific direction.

As you progress, you'll unlock new abilities which help to mix the puzzles up and keep you on your toes. For example, I was granted the ability to use the back touch panel on the Vita to aim and fire bullet points down graph lines.

All the while, the game plays out via extremely minimalistic, gorgeous visuals that aim to match the feel of the average infographic that you might spot on the web. It's really lovely in motion.

We asked Geert Nellen, lead designer on Metrico, what we can expect in the rest of the game's nine worlds.

"Metrico is about experimenting, and experimenting is only interesting if you don't know what is going to happen, so we don't want to spoil too much," he answered. "In fact, we still have a lot of experimenting to do ourselves." 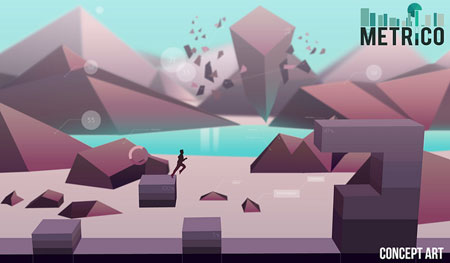 The team is looking to use as many of the hardware features of the PS Vita as possible. "It's not hard to imagine what kind of things you could do with a camera or a microphone once you are in the mindset of the game," he noted.

Nellen and co. are still in the middle of working out which features should stay and go - the game isn't out until 2014, so they still have plenty of time to tinker around with what works and what doesn't.

"Nothing in the game should feel out of place or like a gimmick," he added. "What we can say is that we'll introduce at least one new mechanic for every world."

"Shapes, type of infographics, colors, mechanics, challenges, typography and animation will tie into the theme," Nellen told us.

The core idea is that the Digital Dreams team wants to prove that infographics can be a serious art form for video games, and that they are more than just souped up Microsoft Excel graphs.

From what I've played of the game, I'd tend to agree. The style is so unique, yet so natural - it's as if these sorts of graphs and charts were meant to be played on.

Hopefully we'll get to see more of Metrico later this year. The game is due to hit PS Vita next year.