Solutions to this game's tricky puzzles

The world of PlayStation Vita puzzle Metrico changes as you play. A platform might rise each time you jump, or a pillar might fall when you run left.

This sets up some seriously devious and difficult puzzles. Which is why we've put together this complete guide that shows you how to solve the lot of them. But only if you get really stuck.

Chapter three introduces us to shooting. You can fire bullets by tapping the screen or hitting a shoulder button, and you'll eventually be able to aim by rubbing the rear touch panel.

Having trouble following this guide? Some of the puzzles get quite complicated, and it's tough to explain the solution in words. If you can't understand, speak up in the comments below and we'll try to help out. 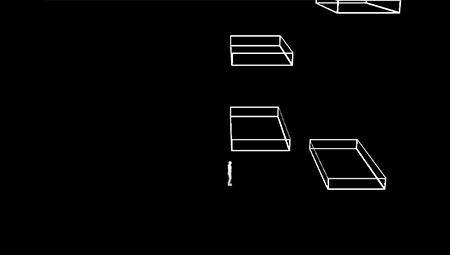 To start this level, either tap the screen or press one of the shoulder buttons. This will fire a bullet, and cause some platforms to appear. Clamber up the first two floating steps.

Then fire another bullet to make new platforms appear, and jump up the next two steps. Fire one more time and then jump up to the top ledge. 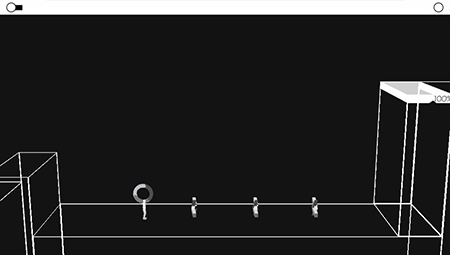 Jump over these three enemies and stand on the right, next to the elevator. Now quickly let loose a barrage of bullets (while facing to the left) to destroy all the enemies and make the elevator drop. Now jump on the elevator and ride it up to the high ledge. 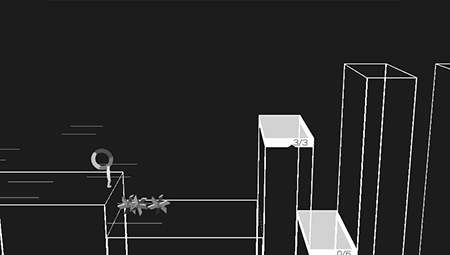 Start this puzzle by carefully killing two of the enemies, by using two shots on each. If you use too many bullets you'll have to respawn (with circle).

Then, jump down and leap over the final enemy. Climb up the staircase until you're on the platform that is now marked 4/6 and let loose two more bullets to make the platform rise up. Now jump over the gap and continue 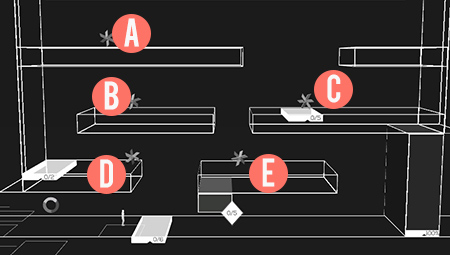 Stand on the bottom platform, and shoot two bullets. Jump up and shoot a bullet to the left to hit enemy D. Then fire a bullet left to kill enemy D.

Jump on to the left platform and then up. Do not kill enemy B, but jump over and kill enemy C.

Walk left and drop down to the floor. Now walk right. 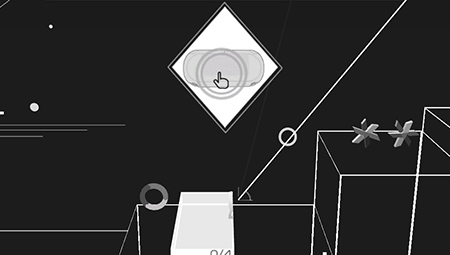 We now learn about aiming. Move the trajectory line with the Vita's rear touch panel so it's aiming at the enemies on the high ledge and bash the fire button until they're dead. Now jump across the ledge. 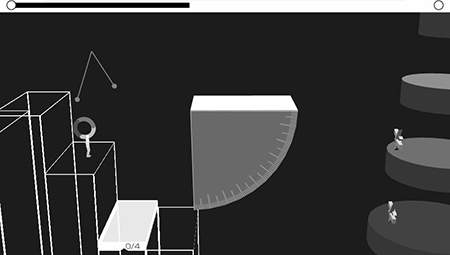 Now quickly jump on the white platform before the bullets hit their target. If your timing is good you'll ride the platform up like an elevator and can wander over the top of the quarter circle and jump over to the discs on the right. 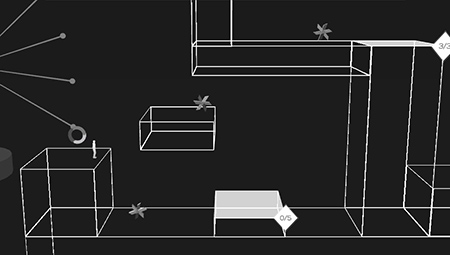 Fall down, jump over the bottom enemy, and stand on the white platform. Aim at the bottom enemy and let loose two bullets to kill it, but only fire the final shot when the top enemy is on the pillar on the right.

You're now on the platform which is in the air and marked 2/5. Kill the other two enemies by using aim to make a small staircase to the right. Climb up and continue on your puzzley quest. 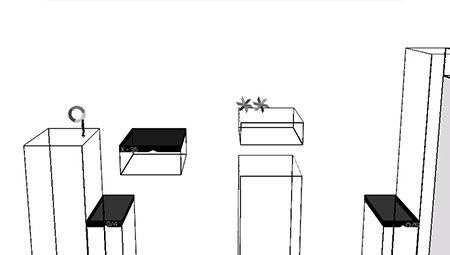 Use aim to kill one enemy here, and hit another enemy with one bullet (basically, you're firing three bullets). This will cause the leftmost platform to rise to the top and you can run along onto the platform marked X = 35.

Now jump to the right a few times to make this platform travel right. When you get to the enemy you'll have to jump onto the white ledge, jump over the enemy, and jump back onto the moving platform.

Now jump on the platform on the right (marked 3/5) and fire a couple bullets to rise up so you can reach the top area. Go right. 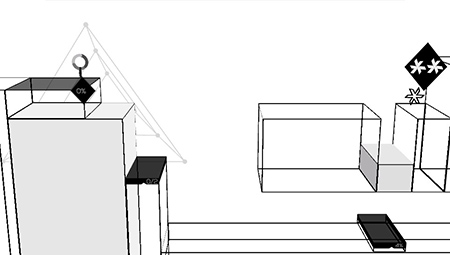 Aim at the enemy portal on the right and fire two shots. Just before your bullets reach the portal, jump up to make an enemy appear. It will get killed, causing the pillar on the left to rise up.

You can now run right, drop down, jump over the platform, and continue on your merry way. 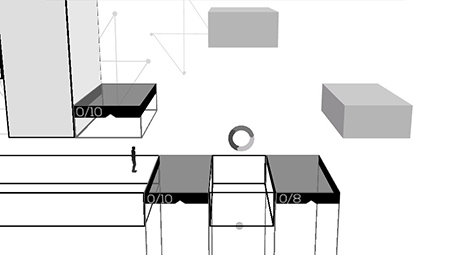 Stand on the bottom left platform and jump up a few times until you can reach the middle light grey platform. Stand on it, set a spawn point (hit circle) and respawn (circle again).

Jump left onto the far left platform. Now jump up until the platform says 10/10 and you can reach the grey staircase on the right. Take it. 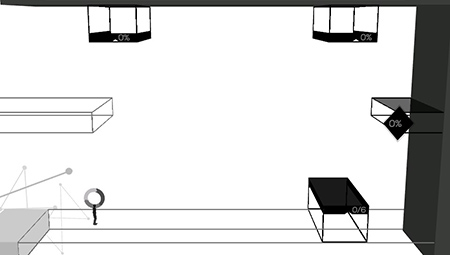 Jump about four times to make the top right pillar come down. Now when you walk right, the horizontal platform can't shoot out to the left. Now jump up onto the right platform, marked 0/6.

Shoot six bullets to make this platform (and the top right column) rise up. Now jump up on the horizontal platform and walk right until the platform goes 85 percent of the way to the left.

Run left to make the top left pillar go up. Then walk right again so the horizontal platform can reach 100 percent to the left. Walk along it. 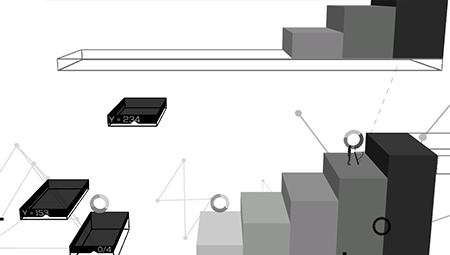 Drop - don't jump - down each step to make the right platform come down. At the bottom of the stairs, activate the spawn point with circle to make the middle platform go up one notch.

Jump over to the right platform. Then jump to the middle platform and activate the spawn point. Now you can jump to the left platform. Jump repeatedly to make the platform rise up to the top ledge and then take the staircase up.

Solving this puzzle is easy, but not when you can only jump 12 times. Follow our guide carefully so you don't make any unnecessary leaps. 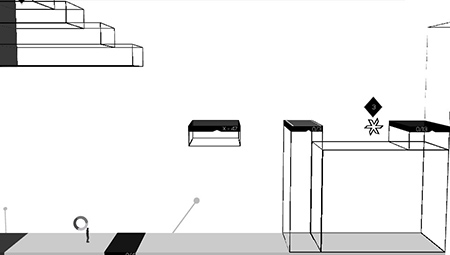 Run right until you're just to the left of the moving platform. Then run back left, stand on the black square on the floor, and press jump three times. Use your fourth jump to leap across to the moving platform and walk with it to the right and then onto the button. 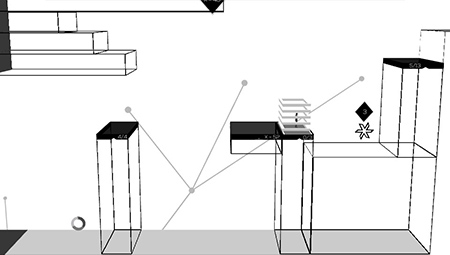 You're now here. Jump twice to unleash two enemies, and kill them both to raise the platform up. Jump for a seventh time back onto the platform, and then onto the white staircase on the left with your eighth leap. 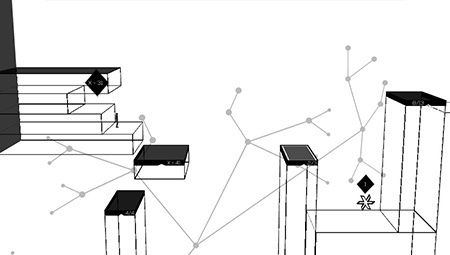 Climb up the stairs and onto the top horizontal platform with jumps nine, ten, and eleven. Now walk with the platform to the right and use your 12th jump to get up onto the tall pillar. Drop down and continue. 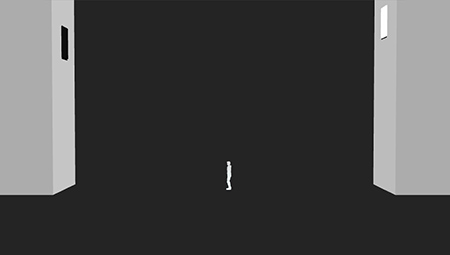