Tanks for the memories (Updated: Now out on Android)

General Morden is primed to take over iOS devices yet again tonight, thanks to the impending release of Metal Slug 2.

Metal Slug 2 picks up from where the first game left off, so you'll be re-assuming control of Peregrine Falcon Squad members Marco Rossi and Tarma Roving.

Together, they must blow up a seemingly endless onslaught of enemy forces, as they struggle to prevent General Morden from crushing the world beneath the cold steel tread of a massive tank. 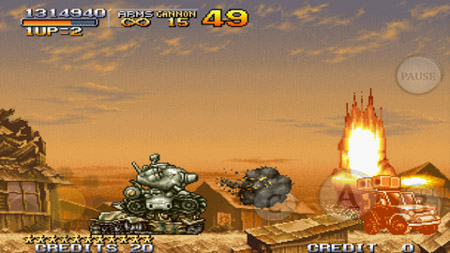 If giant armoured death machines weren't enough of a worry, though, Metal Slug 2's military antagonist has decided to hedge his bets by teaming up with a group of hacked-off Martians.

This means you'll find yourself alternating between mercilessly blasting human soldiers and unloading your Laser Shot in E.T.'s face.

You will also gain access to a brand-new range of tank-like Slugs, including the two-legged Slugnoid and airborne Slug Flyer.

Brothers (and sisters) in arms

You can even buddy up over Bluetooth and indulge in a little co-operative multiplayer, if that's your bag.