McPixel 3 is officially launching this 2022, bringing over 900 gags and 100 levels to PC (and perhaps mobile)

Lovably odd adventure game McPixel 3 is coming to PC and likely on mobile this year, bringing back the 8-bit hero as he tries to save the world in his own way. Created by indie dev and so-called "Mad Scientist of Video Games" Sos Sosowski, the pixel art game features its trademark hilarious gags and mind-blowing shenanigans across a hundred levels.

In McPixel 3, players take on the massive responsibility of saving the world as the titular hero. Each new quest is as mind-blowing as the last, as McPixel will apparently find himself in crazy situations like "summoning a spider-billionaire, having a BBQ in his pants, punching a T-Rex into outer space, peeing on sports cars and kicking Fork Parker in the balls."

With more than 900 gags and almost 1,500 interactive items for players to tinker around with, the game will also feature a water level, mini-games in a wide variety of genres, and - apparently - 258,924,600 pixels. 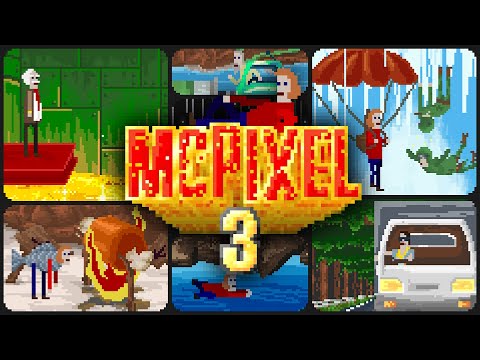 While there's no definitive word that McPixel 3 will land on mobile devices, the OG title did come out on the iOS App Store and on the Google Play Store for Android devices at $2.99 a pop. If you're eager to learn more about the game, you can have a look at the embedded teaser trailer above for a little sneak peek at the visuals and the gameplay.

From the footage above, it does seem like the game is going to be one heck of a ride indeed, with surprises at every corner for eager fans of the genre. Suffice it to say that players should likely expect the unexpected.

Are you on the lookout for more similar titles that will put your skills to the test on your mobile device? Why not take a gander at our list of top 25 best point-and-click adventure games on Android phones and tablets?

Next Up :
M&M’S Adventure is now available for pre-registration on the Google Play Store