How do you fancy playing Marvel Future Fight as Guardians of the Galaxy characters? An update that rolled out today let's you do just that.

But before you run off, know this: you have to earn these Guardians of the Galaxy characters. Oh yes, prepare to put some elbow grease in.

In this update, Star-Lord, Rocket Raccoon, Groot, Gamora, Drax, Yondu, Nebula, and Ronan have all been added to the game's lineup of playable characters.

To unlock them you'll need to play through the new Special Mission stage. While in there, look to win items that will go towards affording these new characters. 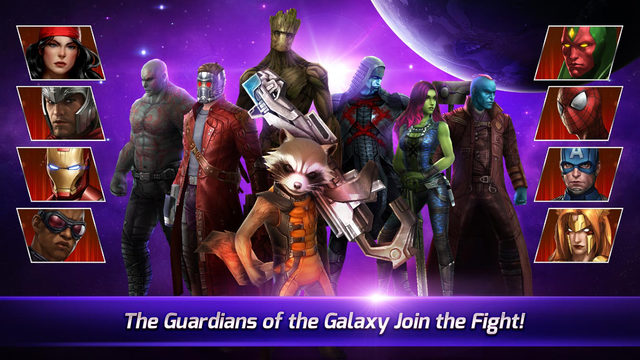 Additionally, there's a new "Dimension Shift System" that, when activated, lets bosses suddenly invade your battles at any time. Defeating the likes of Hulkbuster or Black Cat gives you a better chance at plumping out your character roster.

This update also makes it easier for you to get your favorite characters as well as change gear attributes with a new character customization system.

You can download Marvel Future Fight to check out all of this content in today's update for free on the App Store and Google Play.