Marvel Contest of Champions, the free to play brawler, is out worldwide on iPad and iPhone 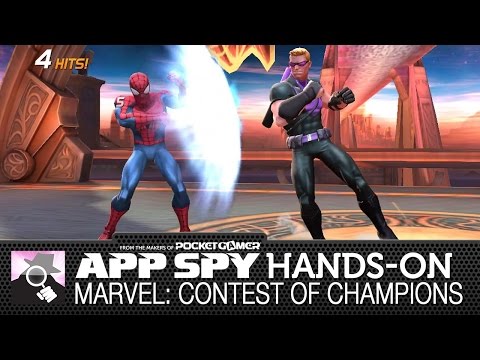 Ever wondered who'd win in a fight between Wolverine and The Hulk? Well wonder no more, because Marvel Contest of Champions is out right now on the App Store, and holds the answers to this, and many more dreadfully important questions.

The game is a free to play brawler of sorts that sees you trolling through a variety of hands-on scraps with a team of super heroes.

It's no Marvel vs Capcom 3, or 2 for that matter, but there's a quick simplicity to the scraps that means, unlike other games of this ilk, you actually feel like you're making a change to the outcome.

Everything's very freemium, from the energy system to the card-battler style hero collecting. But if you’re into that sort of thing I'm sure it won’t be a problem.

We went hands-on with a soft-launched version of the game and you can check that out here. Or give the video back at the top of the story to see some more move-y opinions.

You can grab Marvel Contest of Champions from the App Store right now. And the answer is Wolverine, obviously.