How to kick Spider-Man’s butt - Marvel Contest of Champions cheats, tips, and tricks

Kick, punch, it’s all in the mind

Marvel Contest of Champions gives you the chance to punch Iron Man in the chops, give Spider-Man a slap, and kick Wolverine in all manner of places.

Admittedly, there is far more to the game than that though. And while it might contain beautifully simple controls, you'll need to master the combat to beat the quests and versus modes, and unlock the best loot.

And should you wish to kick copious amount of ass during these modes, you’ve come to the right place.

Here are some tips, tricks, tactics and strategies that’ll see you flatten your foes. 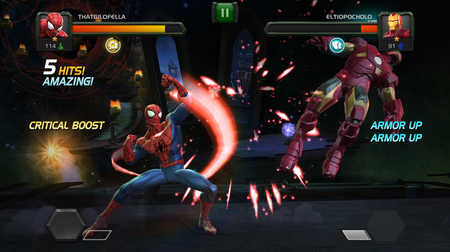 If you’ve played through the tutorial you’ll know the basics of light, medium and heavy attacks. What you’ll learn over time is that each has a few extra uses.

Light attacks are the perfect response to an enemy who is dashing towards you. You’ll stop them in their tracks and give yourself room to let off a combo.

Medium attacks double up as dash attacks - use one of these to close the gap on an enemy but bear in mind the risk: you’ll be open to a well-timed response, and the larger the distance, the higher the danger.

Medium attacks are also great for starting combos, but a second medium attack will always finish off a combo and push your enemy back slightly, usually giving them space to retaliate.

Heavy attacks take a second to ‘charge’, leaving you vulnerable to counters in the meantime. However, they are unblockable if they land. If the space between you and your foe is less than one full dodge, a heavy attack will usually close that gap and knock your enemy down.

One sneaky tactic is to double-dodge away from your foe, charge a heavy attack and wait. If they dash towards you, wait a split second and release the attack - they will run right into it. Rinse and repeat, but stop as soon as they have a special stored.

Most heavy attacks can be countered by either dodging back and responding with your own heavy, or dashing in and striking before the heavy is released.

If you dodge a heavy attack, you’re usually safe to dash in and punish your foe, - but watch out for characters with sneaky multi-hit heavies like Starlord, Deadpool, and Gamora. 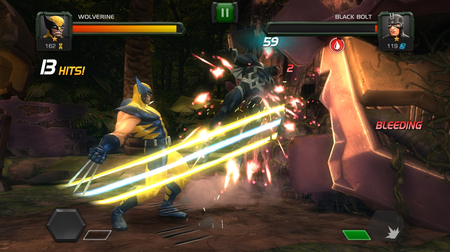 Receiving and dishing out damage is all it takes to fill your special meter, with your character’s rank determining whether they have a Level 1, 2 or 3 special. Only characters with two stars and above can access Level 3 specials.

The best time to unleash your own special is mid-combo, interrupting an attack and ensuring it isn’t blocked, or hammering the specials button as the last hit of your combo is being dished out.

Level 1 and 2 specials can be blocked, and come in many shapes and sizes. Some are local, with a close-by area of effect. Others span the whole width of the stage, and a few start local before finishing screen-wide.

If a special is triggered (you'll know it's happening because the screen will darken) you should always default to blocking. Many specials can be avoided with a dodge, but doing so leaves you open to a later part of the special that can reach you, and puts you too far away to confidently respond as soon as the special has finished.

One of the most common tactics the computer uses is to store a special until they’re knocked over, and trigger it the moment they stand. So, if you see they have a special prepped, always wait rather than running into it face-first.

Level 3 specials cannot be blocked or dodged, so try to get your enemy to trigger a special while they have a Level 1 or 2 ready. To do this, knock them off their feet with a heavy attack and stay nearby, ready to block.

If your enemy has a Level 3 special ready, either use a special with a chance of ‘Power Drain’ to remove some of their special meter energy, or get ready for a wallop. 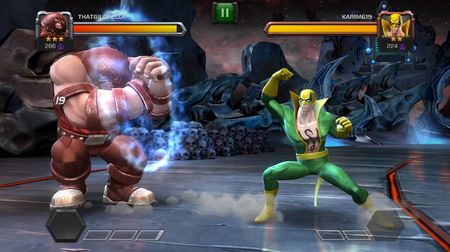 During tougher battles, blocking should be your default action while you wait for your attack animations to carry out, though be warned that you will still take damage.

Blocking stops you from moving, which is handy since the game always has you jog towards your opponent as standard.

Arguably the most important skill to master is perfectly timing your dodges (swipe left on the left side of the screen), which can get you out of almost any jam unless your back is to the wall or unless your enemy lets off a screen-wide special.

One of the most effective tactics in the game is the double-dodge, but you need to time it well. Dodge at the same time as your enemy’s dash, and they’ll catch you. Dodge just after they dash and you’ll retain the distance - follow up with either light attacks, a block or another well-timed dodge.

Consider starting every match with a dodge. If your opponent attacks as soon as the fight begins, you’re ready to counter. 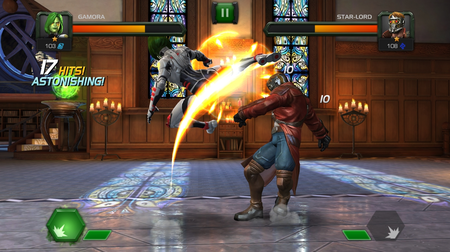 Each and every character can perform the same basic combos by mixing up light (L) and medium (M) attacks, as listed below. If you land the first hit and follow-up quickly enough, the rest of the combo is unblockable.

It’s usually far safer to dodge back after your opponent blocks an attack and prepare to block yourself. Your enemy will typically do a medium attack to close the gap - rapidly tap for light attacks straight after blocking this and they’ll be wide open.

You can mix heavy attacks into combos occasionally, after a light attack has pushed your foe back from you, but it’s rarely worth the risk. 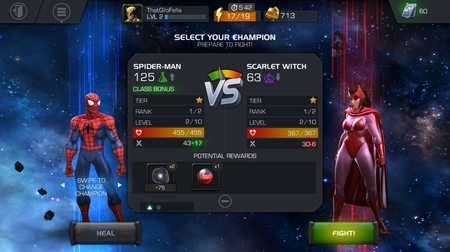 Each character is one of six classes, and each class is stronger or weaker against one other class. These are:

For a more visual version of this, check out this post on Kabam’s official forum.

Before starting a quest, you’ll see a screen displaying the enemy types you’ll encounter, so try to pick an effective team based on class, or your strongest characters.

Take your time. During the early stages of the game, it’s very easy to simply rush your opponents, bombarding them with attacks they’ll barely block, and develop some bad habits.

Before long, you’ll be dealing with foes that’ll require a more considered approach, teasing out their attacks so you can expertly dodge and counter.

So take your time. Learn the ranges of each of each opponent’s heavy and special attacks. Practice those dodges. And get good at blocking.