Exclusive to the Switch

Mario & Sonic at the Olympic Games Tokyo 2020 is the snappily named new entry to the series that sees the plumber, speedy blue hedgehog and their buddies become athletes for a while. It's coming exclusively to the Nintendo Switch on 5th and 8th November in the Americas and Europe respectively.

This new entry will feature 2D events that will have the classic sprites for each of the characters. It's a very cute touch and it's kind of interesting to see Sonic's original pixel form up against Mario's. We're used to seeing their 3D forms together at this point so there's something quite novel about seeing them face off exactly as they looked back the two dimensional days.

Some of the events on offer in 2D form are volleyball, the 100m sprint and judo. So there's a fair bit of variety on offer, not just track events. The 3D events we're more accustomed to from the series are kicking about too and this time around they've added surfing, skateboarding, karate and sport climbing to the roster. For a list of all the events on offer check out the official site. 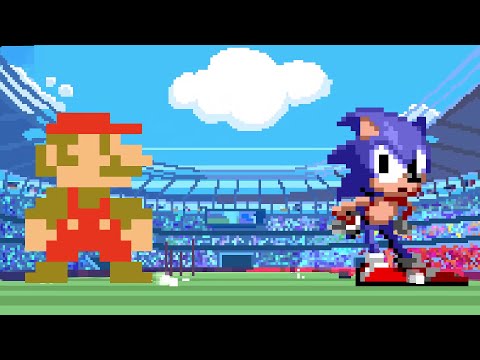 The game will have both online multiplayer as well as local split-screen. As a Switch exclusive there's the potential to make use of some of the Joy Con's less conventional controller features such as motion tracking when playing a bit of badminton, channel it's inner Wii Sports.

As always you can expect a cast from both series with a mixture of allies and foes. Dr Eggman, Bowser, Luigi and Tails are all heading out to Tokyo to take part in the Olympics. Most importantly, Yoshi will be there and I back him to take all the medals on offer.

Mario & Sonic at the Olympic Games Tokyo 2020 will release on the Switch on 5th November in the Americas and the 8th in Europe.