Magic: The Gathering Arena is now available for iOS and Android in Europe with a global roll out tomorrow

Magic: The Gathering Arena initially became available for Android devices when it soft-launched back in January. Now Wizards of the Coast have announced that the game is available for both iOS and Android in Europe and will roll out globally tomorrow.

The game first launched on PC back in 2019 but now you'll be able to carry it around in your pocket. The newly released mobile iteration of the game will support cross-play with the PC version of Magic: The Gathering Arena, meaning you'll also be able to use your current Wizards Account to access your existing digital card collection. 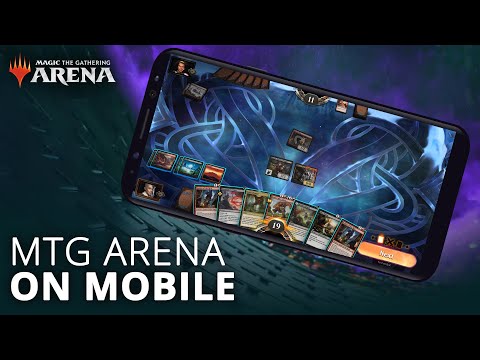 In addition to that, all MTG Arena card sets, formats, events and deck building will be supported in the mobile edition of the game, including the recently released Kaldheim set. Naturally, the controls have been tweaked for phones to ensure it works well on a touch screen.

If, like me, you've never really dabbled much with Magic: The Gathering over the years but still fancy getting involved, you'll be pleased to hear there's a tutorial that will guide you through the mechanics of the game. Additionally, you'll be able to practice against the AI and in casual matches before stepping into a more competitive realm.

On top of that, there 15 different decks to unlock so you can test out various playstyles without having to collect all of the cards individually first. There are daily rewards up for grabs as well that will allow you to start accruing your own collection for building decks.

Magic: The Gathering Arena is available now over on the App Store and Google Play in Europe and will be rolling out to other countries tomorrow. It's a free-to-play game with in-app purchases.

Looking for other cards games to play on your phone? Here are 5 of the best available for iPhone and iPad
Next Up :
CROSSFIRE: Warzone adds new Sudden Breach content and other quality-of-life improvements in latest update