3D DSi game out in Japan

Anyone who’s been to the cinema recently will probably have noticed that 3D films have really started to kick into life after a very prolonged gestation period, with the biggest grossing film of all-time currently pushing the technology to its limits.

It’s also an area games are exploring, with Microsoft’s Natal attempting to break new ground on the home consoles and Apple filing patents for a portable head-tracking device for the iPhone.

However, Nintendo has beaten them both to the punch with a new DSiWare game that looks to set the benchmark in what’s possible with the DSi camera.

Essentially working on the head-tracking system brought to light on the Wii by now Microsoft Natal engineer Johnny Lee, Rittai Kakushi e Attakoreda transplants the concept to the DSi, making it seem like the machine is a window into a fully 3D world.

It works by tracking the users’ eye-position with the inward facing camera, meaning that moving your eyes or tilting the screen causes the image to readjust its perspective and create a convincing ‘window’ effect.

Rittai Kakushi e Attakoreda will be released in Japan on the 3rd of March, but there's no word on whether the game will make it to European or American DSiWare stores.

Even if it doesn’t make it, it should hopefully encourage developers to experiment with what’s possible on the DSi.

Take a look at the video below to see for yourself why everyone’s getting a little excited by it all. 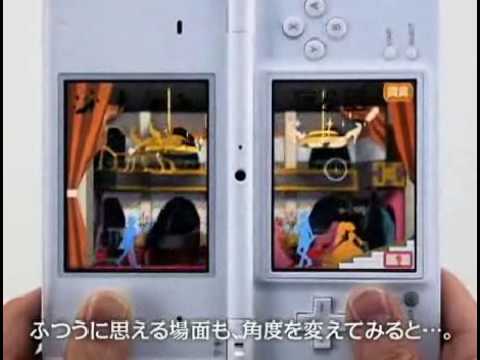 Subscribe to Pocket Gamer on
Next Up :
MU Origin 2's latest update adds the Order Realm, Elemental Battles, and more