Lines On Sides is intended as an extension of the minimalist style Barszczewski began in their previous game, Cubether. The game has you rearranging tiles to match the colours of their sides to any adjacent tiles. As soon as you manage to sort it correctly, black lines will appear between them to confirm you did it correctly.

Because of this style, there are no tutorials which may leave you feeling like you’re in the dark. It’s not completely necessary though, as the mechanics are pretty simple and not too hard to work out for yourself. You can check out the trailer for the game below to see more of it in motion. 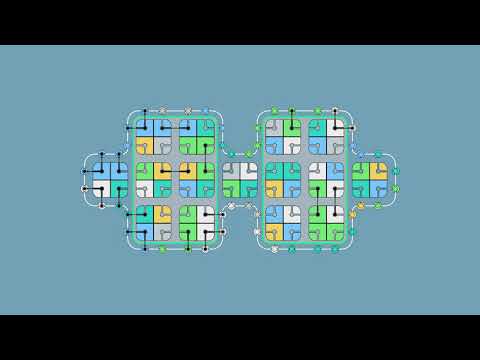 The most important aspect of this style is the fact Lines On Sides can be enjoyed at a relaxing pace. You can simply use the game to chill in your spare time, completing puzzles at your own discretion and not have to worry about stressful time limits or life bars. You can easily forget the worries of your everyday life.

Barszczewski had previously created Cubether, which released on iOS last year. It uses a similar minimal concept as Lines On Sides, though the gameplay was different as it had you moving cubes around a board to match colours and create larger cubes out of that. Every cube moved in its own way, and so it became a game of experimenting with patterns to make large cubes and find the solution to each stage.

Lines On Sides is out now on the iOS App Store, where it is a paid title priced at $0.99.

If you enjoy playing puzzle games, check out some of our favourites on iOS.
Next Up :
Pokemon Go's Hoenn Tour is taking place in Las Vegas, Nevada, in February 2023